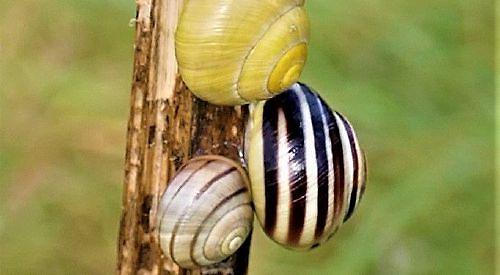 ONCE again, we head out early today. Rosemary drives us to Henley and parks in the Mill Lane car park shortly before 10am.

We set off to take a peek at the River Thames, which looks in fine fettle.

We walk into town along the riverside, noting the odd handsome boat and feeding the various ducks, geese and swans on our way.

The waterfowl are so entertaining and lovely to see up close. We are particularly fond of the resident tufted ducks. Whenever Rosemary prepares to take a photo they dive — typical.

We are heading to the historic market place in the centre of town to meet up with Greener Henley at their Big Green Bazaar.

Firstly, we go to see Professor Richard Fortey and his wife Jackie to have a chat and examine his fungus roadshow, which turns out to be both entertaining and informative.

Some of the examples in Richard’s display appear to be eerily familiar.

We greet Linda Seward, another contributor to the Henley Standard. Like Rosemary and me, she is keen to learn more about fungi, their identification, purpose, value and importance in the ecological scheme of things.

I’m pleased to report that Richard’s display receives the interest that it deserves.

I spot Sally Rankin, of the Henley Wildlife Group, a short distance away. It is warming to see her after so many months.

She offers me a copy of Wildlife and its Conservation in Henley-on-Thames, which was published by her group in 2003, funded by the Naturesave Trust. I’m very grateful as it is a mine of information scientifically described in detail and a valued reference work.

After a brief visit to the Argyll pub, we return to the bazaar and meet Alie Hagedoorn, of Walkers are Welcome Henley.

She is representing the Ramblers Association with a colleague.

We then head up West Street for a quick lunch in the Row Barge, Rosemary’s first visit. Our cheese omelettes and beer are superlative.

Mrs Fortey had advised us earlier to see Patrick Fleming, the “tree man”, so we do.

We get on famously and have so much in common. Patrick informs us that Greener Henley, which he chairs, provides free saplings that can be planted in gardens, fields and paddocks.

The main species are silver birch, rowan, crab apple, hazel, oak, field maple, walnut and horse chestnut. Some of the trees on offer have been “rescued” (Rosemary and I do the same), others propagated. Patrick shows us a diminutive black poplar. We’d love to take it home but our garden in Caversham is not suitable as the species’ natural habitat is a damp meadow on a floodplain.

If you would like a free tree to plant, email Patrick on Greenerhenley@gmail.com

We then head off to Lower Shiplake, taking a left turn off the Reading road and then down Mill Lane.

Not having trod the towpath here since July last year, we feel it is time to revisit.

After parking near the path that leads to Shiplake Lock, we stroll towards the river past some quaint and other incongruous buildings that seem out of place in this setting.

Plenty of wild hops clamber through small trees, mainly English elms. No surrender from this species.

There are plenty of common hawthorns laden with bright red haws. The midland hawthorn (Crataegus laevigata) intermingles with the common, its leaves distinctively three-lobed.

Ivy is coming into full flower, a magnet for a myriad of insects. German wasps (Vespula germanica) and various hoverflies are the main customers. One, a female Eristalis tenax, is making the most of the bounty.

Much despised, ivy provides vital nourishment for insects late in nature’s calendar and also refuge over the cold months for a large range of insects and small birds as they seek shelter and cover.

It is somewhat breezy today but that is not uncommon at this time of year, especially by the riverside.

We head on towards the railway bridge, walk below it and turn sharp right, passing a line of old plane trees to reach the riverbank. The river looks very healthy.

Across the meadow to our left we watch seven or so house martins whistling through the sky. This is not unusual as they often remain into October before heading south to Africa.

A glossy blue-coloured insect, the alder leaf beetle (Agelastica alni)crawls across the leaf of an alder plagued by a gall mite (Acalitus brevitarsus), the blisters turning rusty brown.

The stems of teasel are gloriously reflected in the water and the dried stems of hogweed are framed by a clear blue sky.

Hops advertising their greenish, aromatic coarse-lobed fruits are tempting. I will probably return and gather some to use in an authentic local brew.

Michaelmas daisy, a garden escapee, crops up along the riverbank and is popular with many insects. Pretty it is too, with lilac ray florets and yellow in the centre. We find a form with white florets too.

The seed heads of purple loosestrife and hemp agrimony are prominent as they stake their claim at the top of the river bank. Water figwort is fruiting.

The sky is a stunning blue, full of cumulonimbus clouds. They don’t threaten and appear simply ornamental as they move slowly.

We look longingly at one or two properties on the Wargrave bank — what a super place this must be to live.

As we round a bend, we find far more riverside trees interspersed with narrow animal paths that lead directly down to the water.

I can only imagine that these have been created by badgers to slake their thirst and then adopted by other animals, including people’s dogs.

Indian balsam (Impatiens glandulifera) another naturalised plant, proliferates. Settled on one of the leaves is a flesh fly (Sarcophaga carnaria).

There’s a fine selection of riverside trees along the bank, including crack willow, white willow, grey willow and osier.

The twigs of the crack willow snap easily, hence the name. If you fancy having one, take a twig home and poke in the soil as it will take.

A pair of comely mute swans approach us and, as ever, Rosemary obliges with some bread.

An extensive common reed bed that is also home to great reedmace, or bulrush, looks lovely.

I expect that reed warblers and reed buntings will be back to nest next spring. Cuckoos, too, so watch out little birds.

Common toadflax grows to our left. A late flowering plant, it is also known as butter-and-eggs and is handsome. Oxford ragwort flowers close by.

Over the meadow to the west Canada geese crop the lush grass but seem to have the urge for going (as Joni Mitchell would have it).

On the now dry stems of hogweed, groups of what I imagine to be white-lipped snails (Cepaea hortensis) snuggle together in small groups. They vary in colour.

Marsh woundwort is still in flower, a reminder of summer days.

I sit down on a rudimentary bench adjacent to the former Lashbrook Ferry to take a break and absorb the panorama. We have not seen any dragonflies but then the adults (imagos) have died, their progeny in the form of voracious nymphs lie below unseen, building up for next year’s explosion of fast-moving, dexterous hunters.

We find them quite exquisite. I love the way that they hunt.

We head north, as we did last time we were here, to walk through a pleasant patch of grassland with dark cattle swishing their tails. It is such a bucolic scene that I feel I may burst into poetry.

We duck under the railway and walk past some private property leading to a back road that illuminates some splendid Edwardian houses. We turn left over a neat little bridge to stare into the water.

Shining clusters of red fruits of the Guelder rose greet us as we cross a wooden walkway.

We used to see and hear moorhens here but there are none today on the duckweed-covered water.

We drop down into a familiar meadow to meet a narrow path and head back to the car.

Back home my office (or playroom as Rosemary calls it) has been invaded by box tree moths.

First found in Kent in 2007, the moth’s caterpillars will denude box trees and bushes of their leaves.

They are pretty little critters, so I’m in a quandary as to what to do with them. A difficult decision may have to be made.

Oh, hang on, I spot a kidney- spot ladybird whose hungry larvae may provide the answer. Fingers crossed.

We have had yet another enjoyable day and look forward to many more.