Abandoned ancient hamlet is now covered in trees and rather spooky 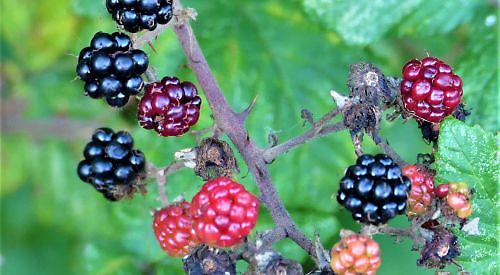 WE stay local today as we are not sure when or where we can purchase any fuel for our car.

Clayfield Copse is just a stone’s throw away from home, rich in wildlife of all types, ancient woodland varied in texture, colour and scent, a real treasure on our doorstep.

After parking by the tennis club, we are greeted by a chattering, welcoming blue tit on the boundary between sports ground and shadow.

We enter the wood. There is always a sense of walking into history as you leave open space for dense cover. To Rosemary and me, it feels like nature’s warm, embracing blanket.

After we adjust our eyes inside the enveloping woodland, there is so much to see — towering oaks, ash, cherry, hornbeam, wych elm, common lime, sweet chestnut, yew, crab apple, wild service tree and beech.

The understory is varied, too, with holly, hazel, field rose, wild privet and blackthorn. Lower down, woodland grasses, ferns and flowering plants are scattered in dappled sunlight.

There are numerous paths to right and left but we hug the wood’s edge, taking care to step over prominent roots that seem to spring from nowhere.

Everything seems so green that I have to remind myself that it is October.

Rosemary spots the caps of common stump brittlestem on the decaying bough of a beech tree.

Across the path we see another creamy-coloured fungus with prominent gills growing on more rotting wood through some fine mosses. I have seen it before but am not sure what it is, so will have to check. Lichen decorates a hawthorn and sunlight shines through still green hazel leaves.

An oak tree seems to be walking, a strange sight.

A huge mass of giant polypore (Meripilus giganteus) bursts at the base of a beech, birch polypore (Piptoporus betulinus) capitalises on decaying stumps. Another fungus, cushion bracket (Phellinus pomaceus), is a specialist of the prunus species and is making a meal of a dead cherry tree.

We enter Blackhouse Wood. There is a subtle change here as we cross into Oxfordshire from Berkshire.

A wild pear and a wild service tree with plated bark look healthy, the latter scattering plenty of russet-brown, partly spotted fruits all over the woodland floor.

A median-aged beech has a small hole about 10ft up its trunk which maybe was home to some nuthatches a year or two ago.

In general, the birds occupy old woodpecker holes. The female daubs mud around the hole to narrow the size of the entrance. I believe that we can detect some evidence of that here, although much of the mud has been worn away by the elements.

Beech mast crunches underfoot. I take a break on a convenient bench to take in the panorama while Rosemary wanders about, snapping away with her camera.

We turn down Foxhill Lane that leads to Playhatch where we have lunch at the Crown before retracing our steps.

Luckily, we manage to refuel the car as well and decide to visit Noke End, near Chazey Heath, which I believe is an old, deserted hamlet.

Leaving the car on a corner opposite the Pack Saddle pub on the A4074, we move through tree cover to join Jacksons Lane, an old thoroughfare that leads all the way south to The Warren in Caversham.

Caversham Heath Golf Club occupies either side of the lane. We hear a skylark above while black-headed gulls look up to no good as they strut along the fairways, perhaps in search of golf balls.

After a short while, we leave the bridleway and take another right of way to our right. It does not look well-trod and is rather overgrown.

After a relatively short stretch of open ground, we pass through a small but welcome plantation of native trees with a large contingent of sweet chestnut planted in straight lines. Why not plant them randomly for a natural look?

Emerging back into the open, we find some splendid spindle bushes, leaves turning red, the fruits a gorgeous pink and orange.

The haws on hawthorns look splendid, like tiny apples, and blackberries ripen, red to deep purple. Most will be eaten soon by clambering rodents and birds.

To our left, common poppies are mixed with scentless mayweed, a striking combination of red, white and yellow.

Beyond, the land undulates in some style. I like the sudden switch from woodland to meadow that we see all around.

Arriving at a crossroads, we join part of Newell’s Lane, another ancient track and bridleway where we say hello to a fellow walker as golfers cross from green to tee.

Noke End is to our left. There are several old wells in the abandoned settlement which is now covered in trees. There is a spooky feel to this place.

I wonder what the former inhabitants did for a living and whether any descendants live among us to this day.

Not a long way off there was once the medieval Chazey manor house, demolished a long while ago.

Several wells still exist but are cordoned off by rudimentary fencing.

We walk on to reach Rose Farm that sits on a crest with some windswept Austrian pines and a fine view down towards the Thames. Old byres are falling into disrepair.

If you take this narrow path to its final destination you will enter Mapledurham via Park Wood.

Once, a stream ran from where we stand all the way down to the river. There is much water up here on the south Chiltern dip slope, most probably through natural aquifers.

Many of the pathways here can be dated back to the 1200s, giving an insight into human habitation and traffic over the broad spectrum of time.

Turning back from Rose Farm, we spot some charcoal burner mushrooms. They are common and widespread but a pleasure to encounter nonetheless.

A red admiral butterfly and a comma pose for my wife’s lens.

The brambles are still in flower (as is a foxglove back home — strange for the time of year).

At a junction we regain Newell’s Lane and head north. Once again, it’s narrow, shaded by brambles and bracken. We hear the croak of a raven off to our left. We cannot see the bird but the deep tone is unmistakeable. The species is increasing in numbers hereabouts.

We stop to admire a clump of musk-mallow with scentless mayweed. Teasel rises high above red and white clover.

As we drop down the old path, I spot some Guelder-roses, leaves turned red and heavily laden with glorious scarlet berries. Black bryony is equally laden.

A field rose is infested with robin’s pincushion, the work of a gall wasp (Diplolepis rosae). The wasps lay their eggs in the rose’s buds in spring, producing strange red hairs. The young emerge a year later to repeat the process.

The gall is known as the “sleep apple” in Germany as it is said to aid sleep if placed under your pillow (Britain’s Plant Galls by Michael Chinery).

Rosemary spots purplepore bracket fungus on the fallen trunk of a conifer. The upperside is typically stained with green algae.

Newell’s Lane takes a sharp dip and then a steep rise. The banks on either side become high and our path exceedingly slippery and stony so we tread with caution.

We reach the end and return to our car. What an adventure — somewhere new to Rosemary and paths I have not trod for 20 years.

We celebrated our first wedding anniversary on Wednesday and I’m glad to report that we are very happy.