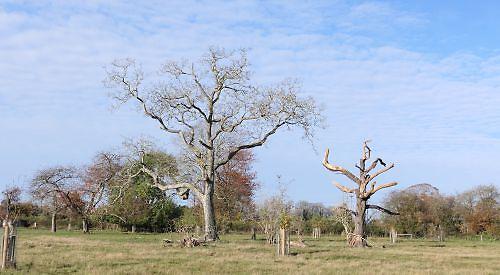 IT has been some time since we have walked around Collins End, near Goring Heath.

Rosemary suggested that we stay close to home as we are short of time once again.

After a substantial breakfast, we set off in search of woodland autumnal colours.

As previously, we leave our car in a convenient spot off the road opposite the former King Charles Head pub.

We walk through the historic orchards to the south-west via some splendid wooden gates courtesy of the Chiltern Society, to which we belong.

The earth beneath our feet becomes muddy and clings to the sides and soles of our boots, full of clay and small, glistening flints.

The water table must be high here despite the fact that we are at an elevation of some 370ft above sea level.

The geology of this part of the world is so varied. I’ll have to ask a local expert to explain why we encounter such local variations in topography.

Could it be down to ancient river channels, now raised aloft from old riparian flows as silky time-polished, rounded quartz stones of different sizes, pink to near-black, lie in proliferation?

I’m in awe of the land. There are things to see in all four seasons, always with a different shape, sheen and angle, from trees and plants to stones.

In the blue above, red kites and buzzards mew and wheel. A murder of argumentative carrion crows caw, silhouetted against the clear sky. A pair of magpies state their disapproval. Wood pigeons take off from beech trees as if in panic.

We note the absence of horses in a large, grassy paddock. There used to be a resident pair with large hooves. They were so amiable, I wonder what has become of them.

The solitary patches of brambles remain, beloved by nesting migrant blackcaps and whitethroats in summer.

On either side of us oak trees are silently shedding golden leaves. In the distance is a still-green exception. It, too, will change colour soon enough.

Male ferns are still winter-green under the protection of silver birches. Hawthorns are in fruit to the side of a man-made earthen boundary marking the edge of Coxsetter’s Wood with its beech, oak, silver birch and larch trees.

In the open ground, previously industrious moles seem to have hunkered down so there are scant molehills even though the weather is mild for November and the earth is soft. There must be a bounty of earthworms to be gobbled up.

I do love how these near-blind, velvety-furred mammals with powerful claws excavate the soil, throwing up tiny treasures from time to time as they turn the earth.

Moving alongside the rich pasture, we study the lane-side flowers (white dead-nettle and pink-flowered herb Robert) and the grasses that form a central, green line. Linnets, chaffinches and skylarks grace the hedgerows and sky.

There are ancient cherry and walnut trees on Collinsend Common. Among the veterans, newly planted saplings seem to have settled in well.

I am happy to observe their vigorous progress. In years to come, they will be appreciated by future generations as they soak up the sun’s rays to capture and store CO2.

A sympathetically, densely planted hedgerow that borders the old orchards on relatively level ground is full of native shrubs and trees.

Now in full autumn flush, we admire deep-red haws, the capsules of spindle that resemble little orange-coloured jewels in pink purses, dusky, slightly-furred sloes on blackthorns and blackberries sending out an open invitation to small mammals and birds.

Dogwood leaves are turning red, those of hazels and field maples shades of near translucent yellow.

Ambitious bank voles scurry about underneath, gathering up what they can to store in their winter larders.

A flock of speckle-breasted fieldfares cross the sky like a shoal of airborne mackerel — such handsome winter visitors with ululations like those of lapwings.

They are accompanied by the smaller but equally attractive migrant redwings, another species of thrush.

Robins, dunnocks and chaffinches dart from left to right, from bracken to hawthorn and back again.

Garden spiders, orbwebs (from the genus Araneus) have strung out beautiful, intricate webs.

Tiny wrens behave like hedgerow bouncers telling us where to go — so frightening!

We arrive at an old crossroads and continue through an avenue of cherries.

Logs are stacked up on our left with a stand of mature oaks on the right. A huge specimen has fallen and has been partially cut up.

After arriving at Holmes Farm, we head north-west towards Westholme Farm.

Through gaps in the trees and over gates to our left we glance at contented horses in a large field with a mixed woodland beyond.

Among low-lying brambles, the pale, fluffy pods of rosebay willowherb contain cottony seeds, field and dog-roses bear vermillion hips and hogweed is still flowering as a money spider clambers through it.

Great tits dart from one side of the track to the other into the deep and familiar cobwebbed cover.

We turn back at Westholme Farm and there’s a cold wind whistling over our shoulders on the way back to Holmes Farm.

At the crossroads we change tack and head west on a line that once led to the local post office (now closed).

As we idle along the made-up private road, we pass isolated properties and wonder how people out here deal with frozen tracks and roads in winter.

The firm ground ends as we walk past chocolate-box cottages to find ourselves funnelled into an avenue of trees.

How big they are with towering trunks that positively lurch upwards towards the heavens. Their fragrant fallen leaves colour the path bright yellow.

This is a very narrow lane with scarce width for a horse and cart so why were they planted? Perhaps just as ornament.

Retracing our steps after meeting the road to Path Hill, we note an abundance of yew and hawthorn saplings. The fields to our right are broad and empty.

The occasional grey squirrel leaps from branch to branch.

After a while we meet a private slip road that leads to the main drag and our car.

Rows of ash trees line the way, pruned to an uncommon height and very straight.

Beer cans, coffee cups and other rubbish are strewn on either side. What is wrong with people?

Before getting into the car, I admire the entrance to Gutteridge’s Wood, taking in the rich colours of beech and oak leaves.

Our feline family is now complete after we collected Sabrina and Spooky. We will keep all four kittens indoors until the end of the year.

Our first pair, Cobweb and Buffy, love to have their tummies tickled. Their elder brother and sister are settling in, although Sabrina is very nervous and hides. With caution, Buffy approaches and asks them to relax. Sweet. The good times are coming — for us and the cats.