Back on the golf course, not to hit a ball but admire beauty of nature 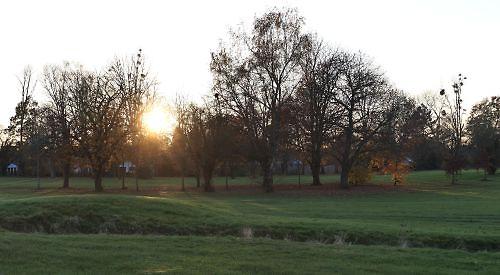 ROSEMARY and I decide to have a look around a large, green open space in Emmer Green that’s within walking distance of home but is not accessible to the public as it is private land.

Reading Golf Club’s course has closed after 110 years, the club having relocated to the former Caversham Heath Golf Club, which is such a shame for me as the course holds so many treasured memories.

The future of some of the abandoned land and clubhouse off Kidmore End Road hangs in the balance.

As things stand, a revised proposal has been submitted by Fairfax and the club to build 223 units, down from an initial 257, on 33 acres earmarked for just 90 to 130 by Reading Borough Council in its local plan.

A far larger area of land that makes up the once glorious course lies within South Oxfordshire. Part of this is now used for golf, foot golf and disc golf as part of the Fairways Golf Centre and retains much of the original course.

Other parts have been promised by the club as a country park area for the local community.

A group called Keep Emmer Green with (to date) 1,600 members is opposed to the proposed development on one third of land within Reading borough and has put forward an alternative plan for the future use of the land, which I found most interesting  (https://keepemmergreen.com).

I want to walk the course so I can reminisce about the many fine days I spent on it as a young man with my father, a scratch golfer, and because I want Rosemary to see this beautiful countryside on our doorstep before its likely development.

I used to play golf but found it boring. As a lad, I was far more interested in looking for wildlife, from woodpeckers and yellowhammers to slugs and snails.

I last visited the course about 18 years ago in order to conduct (with the golf club’s permission) a botanical survey for the Berks, Bucks and Oxon Wildlife Trust.

I concentrated on the north end by Tanners Lane and made some surprising discoveries.

Today, we start to explore between the old first hole and the 18th, a broad expanse of level, exceedingly damp land where homes may be built.

In fact, a winterbourne runs through the northern side of the top holes with a dip, deep and rugged, that would present a challenge for builders.

How the course has changed. The old fairways, once pristine, are turning rank and the old bunkers are overgrown, with grasses growing high.

However, the majority of trees seem to be in fine fettle, obviously much larger than I remember them.

They are varied too, from conifers to native deciduous species.

One in particular is a very old, massive oak beside the final hole. I’d guess it is some 600 years old. I worry about the damage to its extensive root system if building work goes ahead.

We walk on towards the oddly named Cucumber Wood between the 4th and 17th holes.

The wood is mainly furnished with beech, oak, hazel, ash, cherry and holly and is home to many bird species, including great-spotted and green woodpeckers, goldfinches, greenfinches, robins and various titmice.

Somewhere not far away magpies, carrion crows and jackdaws are engaged in corvid disputes.

It is a smallish and compact but lovely wood.

In a concealed section, the tee to the former 5th hole is still prominent.

The sweep of land swerves to the right into a tight valley. From this vantage point it is easy to make out an old, well-trod lane in a sheltered valley named Highdown Bottom. I imagine that it is an ancient track.

Stony and fragrant, I used to walk here before I was even in my teens and at secondary school. There was a mystery about the place with the smell of horse dung, the chirruping of tree sparrows and the reedy sounds of now uncommon bullfinches.

I was entranced to discover bird’s nests, so wonderfully constructed from cobwebs, grasses, fine twigs and feathers that held jewel-like clutches of eggs.

It is such a shame that I did not own a camera at the time but I’ll never forget what I saw.

The wood has changed, though, and not for the better.

Rubble from bricks and concrete slabs are strewn about. Some people have lit a fire and succeeded in burning three trees so they are beyond recovery. Mindless vandals.

Apart from this sad sight, much of the old course is in good shape.

Dropping down from the sloping 5th hole, which is quite steep, we find ourselves in Highdown Bottom.

Rosemary is taken with the beauty of the place.

We proceed eastwards on what was once the 14th hole —  at 501 yards, a par five. It is broad and rough with a good mix of trees on a slope to the left, Cucumber Wood to the right. I notice a dead beech that resembles a diplodocus.

We reach what was the green close to a dip in Kidmore End Road that lies just over some trees and then set off uphill on a leaf-strewn alley alongside the 16th. I have never taken this route, which is presumably used by the greenkeepers.

There are fine old oaks along here as well as hazels, beech, spindle, hawthorn, hollies and field maples with the dappled sunlight illuminating the last of the golden and yellow leaves.

Emerging onto sodden high ground, we stroll along the 17th hole to meet the 18th once more.

Some contraption has been installed to perhaps gather information on the water table.  Nearby a dead wood pigeon lies face up, feet curled.

Rabbits are evident, having excavated holes in the fairways, where we find some basil thyme (Clinopodium acinos).

Back home later, I call my friend John Larrad, who was once the club’s professional and now lives in Austria (currently in lockdown), to tell him what we have seen.

When he joined Reading at age 23, he was the youngest pro in Britain. He spent 22 years there and, most notably,  tutored the  Reading-born golfer Michael King, who once played in the Ryder Cup.

John sounds most disturbed by my description. He loved the club and does not want his memories destroyed so won’t be returning.

Sitting outside in the dark before supper, I hear an animal scuffling through some fallen maple leaves just over the fence in our neighbour’s back garden.

It is a badger, bold as brass, and undisturbed by my bright torchlight only feet away. I’m pleased to see Brock after such a long time.

Rosemary believes that he lives in a sett at the end of our extensive garden. He looks as fit as a fiddle.

It starts to snow and I capture a flake in my hand. As it melts in my palm, I study the intricate, unique structure and wonder at the beauty of it all.

High above, deep clouds hurry across a nearly-black, starry sky with a moon rising. I love it.

Vincent Ruane did not make it clear that the Reading Golf Club land in Emmer Green that he was exploring is in fact private and not accessible to the public, except those paying to use the Fairways Family Golf Centre. He should not have been there without the club’s permission. We are happy to make this clear and apologise to the club for this error and any misleading impression given.