Sunny Sunday brings out the walkers on beautiful riverbank 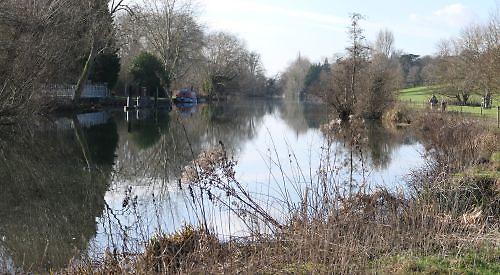 SLOWLY but surely the days are getting longer.

Over time the promise of warmer days will be fulfilled. Our woods and meadows will be full of flowers, hedgerows in blossom, with attendant pollinators, bees, moths and butterflies.

What joy and hope this will bring us all.

Birds that visit us for winter will soon head back to northern and eastern Europe.

In spring other migrants will return from the continent and Africa to nest and create a new generation.

The days will be longer so more food will be available for these birds to feed their new broods.

By contrast, much amphibian, mammalian and reptilian wildlife has been inactive and invisible over the last few months in hibernation.

Hedgehogs, bats and hazel dormice all hunker down.

The hedgehog usually takes a long sleep in a substantial pile of leaves called a hibernaculum, about 2ft across, between November and March.

The dormouse spends from October to May asleep in a grass-lined nest on the ground or a specially constructed wooden shelter.

To build up their reserves, the dormice feast with singular determination on hazelnuts, berries, rosehips and insects before the marathon sleep.

Both hedgehogs and dormice are largely nocturnal.

As to bats, the only mammals that fly, I have loved them since my teens when I used to hear the “click click” of a common pipistrelle. At first, I thought everyone could hear them but, as I found out some years later at a university lecture, I was the only one in the packed theatre to have this privilege.

I’d love to hear them again but I’m afraid age has probably taken its toll on my hearing.

Snakes hibernate too. Adders frequently adopt empty mammalian burrows before emerging in late February or early March if the weather is favourable.

Grass snakes awake in March having usually spent hibernation in heavy bracken litter, normally near water. They swim with panache and elegance.

As for amphibians, the warty common toad is an amusing little creature, I think.

Unlike the common frog, a toad walks rather than hops.

Like the adder, it will claim an abandoned mouse burrow to hibernate from the final days of September until the end of February — well away from open water.

These creatures are driven to visit age-old breeding grounds around March.

As the Henley Standard has reported over many years, thousands of them risk their lives each spring by venturing out at night to cross the busy Marlow Road to their spawning pond. Luckily, the Henley Toad Patrol was set up more than 20 years ago so dedicated folk go out each night during the breeding season to pick up the creatures and ferry them across the road.

Great work and so important. If a toad could say thank you, I am sure it would.

Our most frequent amphibian, the common frog, hibernates for a shorter period, from mid-October to late January.

The species then breeds from the end of February to early April.

It is very easy to differentiate frog and toad spawn if you are fortunate enough to encounter them both.

Frogspawn forms jelly-like clumps with up to 2,000 eggs with black interiors.

Toadspawn forms strings that wind around aquatic vegetation with up to 1,500 eggs.

It is Sunday and the sky is sheer blue, so Rosemary and I take a stroll before the predicted strong winds arrive.

Rosemary drives us from Caversham towards Henley.

We note the renovations going on at the Plowden Arms in Shiplake (to be renamed The Plough, its original name) and turn right at New Cross and head down Mill Lane towards Lower Shiplake.

Heading towards the lock, there are so many cars parked that we turn off and park before returning on foot. There is a lot of people out walking today.

It is apparent that the present road was artificially raised long ago, which indicates seasonal, intermittent flooding.

Pools of water languish to either side, perfect for our amphibian friends.

The road is surrounded by old spiny hawthorns and horse chestnuts bear distinctively sticky buds, which brings a smile to my face.

A large oak casts a singular, aristocratic shadow on a watery meadow. I call this tree Terry- Thomas as he displays a “lucky gap”.

Walking past an array of cars, we slip down a narrow path by a flint and brick wall. In previous visits we have seen wildflowers growing in and on it.

Today, white dead-nettles are giving it their all. There will be many more to come.

We meet the riverbank, where the path leading to Shiplake Court with its steely gaze and the college is rather slippery, so we move with great care.

Unusually, there are practically no waterfowl around.

Some of the largest molehills that I have encountered adorn the bank, so close to the lapping water.

A boat fires up across the still water and heads upstream, chugging away.

I stop to peer in the gravelly shallows that before too long will be home to fish fry while mayflies, dragonflies and damselflies will flit about above the surface.

It is all rather nice, although the breeze is noticeably growing stronger.

We pass some graceful willows and strong alders before we come to two of our most beloved trees, a pair of oriental planes (Platanus orientalis).

These are old specimens and look content settled on the riverbank, their natural environment.

We turn back and after a short while stop to see if we can tempt any birds with some bread.

Perhaps they have spied a large pike but, unfortunately, I cannot see below the water’s rippling surface.

On the way home we stop off for lunch at the Crown at Playhatch. Like the riverside, it is very busy and we eat at the bar. Not too much mind as I am cooking tonight. Like observing nature, I find it pleasurable.