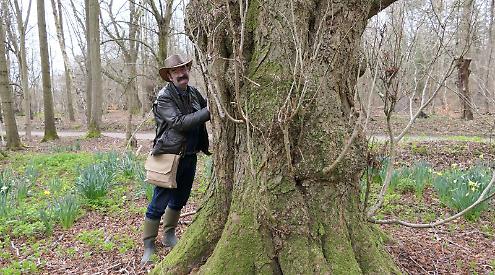 IT is now mid-March. The days are getting longer and slowly growing warmer. Before you know it, the clocks will turn and we’ll enter British Summer Time.

We make our usual pre-breakfast walk in the garden, which is full of small plants in flower, such as primroses and dog-violets.

It should not really bloom until June, which is an anomaly, but then it is most commonly found in the north and west, which may account for its early appearance.

Although scarce locally, the species can be found in the wild in Oxfordshire, predominately in the south. It prefers acidic soils.

There is a clear sky this morning and after feeding the cats, we jump in the car and take off.

Rosemary drives us to the side of Nippers Grove, near Hook End and Wyfold, at Kipping Hill and parks up.

Although close to small hamlets and expensive des-res developments, this area is sufficiently remote to retain its individual character and diverse inhabitants, from trees to orchids.

It is normally quiet too, something that I appreciate. The vehicles that pass us seem to be, with the exception of postal delivery drivers, local residents and the inevitable recreational cyclists.

What really makes this tiny area is the outstanding diversity of flora and fauna. It is also home to many mycological treasures.

My favourites include the stands of large-leaved limes (Tilia platyphyllos) that straddle the road and the violet helleborines (Epipactis purpurata), one of my favourite wild orchids, that grow underneath.

Both are nationally and locally rare but this is a stronghold for both species.

The large-leaved lime was first recorded in 1794, as described in The Flora of Oxfordshire (Pisces Publications 1998, Killick, Perry and Woodell).

In Flora Britannica (Sinclair Stevenson 1996), Richard Mabey writes: “Large-leaved lime is a tall and elegant tree and one of our rarest hardwoods.

“Until a few years ago it was known in any quantities only from a few woods in the Pennines, Wye Valley and Cotswolds (though widely planted elsewhere).

“Then in the early Nineties Francis Rose and colleagues discovered a string of some 16 new sites along the foot of the South Downs, between Hampshire and East Sussex.

“Most of the trees are in ancient copses or on boundary banks. The most impressive site, Rook Clift, near Reyford, is a remarkable place and one where it is hard to believe that the trees could have gone unnoticed for so long.

“Even from a lane a quarter of a mile away, the limes look stupendous, their domed, billowing crowns standing clear of all the other trees.

“There are more than 50 in the wood, a mixture of huge coppice stools, some maybe 1,000 years old with poles that have something of the sinewy grey sheen of tropical hardwoods, a few pollards and some handsome maiden trees, sprung from seed or old stools and now maybe a century or so old, and all bearing bright, large viridian leaves.

“T Platyphyllos is now cropping up in other, similar sites (I have found coppiced stools at the foot of a Chiltern escarpment at Fawley Bottom) and it looks as if large-leaved lime was a component of the original wildwood on the lower levels of the chalk, just as it was on limestone.”

Well, all I can say is that I’ve known these trees for some 40 years.

The orchids will not appear until late summer but we are presented with a broad but disjointed spread of wild daffodils (Narcissus pseudonarcissus ssp. Pseudonarcissus), a native and an indicator of ancient woodland.

The plant is in full flower growing near extensive colonies of dog’s mercury (Mercurialis perennis) which rise to glow in the early spring sunlight alongside emergent lords-and-ladies (Arum maculatum).

The wild daffodil prefers neutral soil but is averse to a dry summer. The flowers are typically large, between 2.5in and 3in across, with the palest of outer segments and a glorious bright yellow trumpet.

I wish that I could travel back in time to see how the area looked thousands of years ago.

We are, of course, treading on the old Goring/Henley route that I described in this column last month.

It is still well trod but somewhat excessively. A portion of the bridleway to Wyfold has been wrecked by horses, off-road scrambling motorcycles (prohibited) and riders of mountain bikes, not just on the official route but to either side.

Terrible and unnecessary — why are some people so selfish? Strangely, no one is about today.

Other than the limes, these woods have a diverse range of tree species, including silver birch, hazel, hawthorn, sycamore, pedunculate oak, ash, holly, field maple, wild cherry and the odd beech.

We scramble through brambles, avoiding the churned-up mud on our way to a woodland pond. I always find ponds a source of fascination. Were they dug with intention, have they existed for many centuries, are they fed by natural aquifers? I simply don’t know but these sylvan ponds do crop up and a welcome sight they are too.

This pond is currently largely covered with a film of common duckweed (Lemna minor). We see no frogs, newts or toads.

Retracing our steps, Rosemary kicks up leaves and calls me. She has found a leaf of my favourite, the wild service tree. The leaf is distinctive. I look around but am unable to find from where it has come. A good sign, though.

Our tree at home is about to burst into leaf or, as Rosemary puts it, “go twang”.

We cross the quiet lane to study the fine variety of native ferns that inhabit a fairly deep ditch. Those that have not been eaten are doing very well. Marsh tits announce their presence.

We head briefly to the west but the path is a quagmire so we return home after what has been a worthwhile trip.

I turn in early so I miss what Rosemary tells me was a clear sky full of stars that I could have trained my telescope on. I’ll stay up another night — it always makes me feel so small when I stare at the heavens.