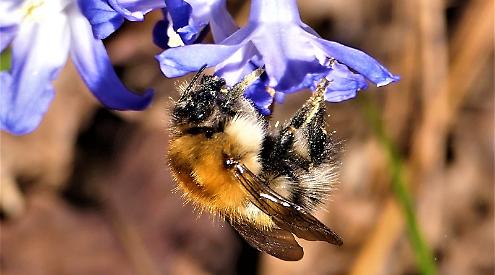 IT is unseasonably cold this morning. Our cats are initially reluctant to step outside but three of our four join us to wrestle with each other in the burgeoning sunshine that should warm things up later.

The cats all seem happy, climbing trees and walking on our shed roof and then dancing through the daffodils with abandon.

All are settled now, sharing our house and garden and, hopefully, with the knowledge that they have a splendid life ahead of them as long as they behave (unlikely!)

Our two wooden bird boxes, carefully positioned, are being given a spring clean by great and blue tits in readiness to raise new broods.

Current and traditional advice is to clean them out before the nesting season but this makes no sense to me. Do people remove the contents of natural tree crevices? Of course not.

Nature knows what to do, when and how, so leave it to the birds.

Down below the trees, I watch tree bumblebees (Bombus hypnorum), recent continental colonists, gathering nectar as they probe the interior of the flowers of blue-petalled Scilla, otherwise known as Siberian squill. Funnily enough, the plant is not a native of Siberia but from south-western Russia, the Caucasus and Turkey.

Other additions to our garden flora include honesty (Lunaria annua). We have no idea how it found its way in here but it does seem popular with the insects.

Our three mezereon shrubs (Daphne mezereum), which are rare in the wild, are in bloom too. The small pink-sepalled flowers shine directly from the plant’s stems.

The shrub is toxic to humans and some people get a rash from simply handling it.

Many of our winter-retreating ferns are emerging with a flourish.

We are both entranced by the lady ferns (Athyrium filix-femina) with small fiddleheads heading skywards. The lady fern can, when firmly established, grow very large, more than 3ft wide and high.

Ours are growing between resurgent sweet woodruff (Galium odoratum) and forming large mats of a lovely green hue, just as they do in the wild. The plant is an indicator of ancient woodland.

As the two of us stroll in the back garden accompanied by our little throng, a male blackcap (Sylvia atricapilla) announces his arrival with a strident warble that is unmistakeable. Welcome back, little bird.

Since my childhood, continual generations of house martins (Delichon urbicum) have nested under the eaves of a fairly old building on the corner of Prospect Street and Church Street in Caversham.

I love to see them return, year after year, and enjoy watching as they dart in and out of the nest.

Rosemary recalls some nests under the roofline of a small building to the right of the traffic lights on the approach to Sonning Bridge from Sonning Eye. She used to enjoy watching the birds as they flew to and fro.

About 10 years ago the little house was renovated, repainted and the ancestral nests destroyed, so the birds have never returned.

The martin’s nest has a small entrance. Built of mud, it is very solid and resilient, repaired and patched up from year to year as necessity demands. Such industrious birds.

The sexes are alike in colour with white throats, rumps and breasts.

As they fly, they “trit trit” in distinctive fashion. They can often be seen flying over stretches of water in the hunt of aquatic-born insects. The swallow (Hirundo rustica) has a deeply forked tail. The tail streamers of the male are longer and thinner than those of the female.

Very agile birds, swallows are able to fly at speed very close to the ground, often with a quick twist and turn.

The red forehead, chin and dark throat are indicative, as is the absence of a white rump.

I find them most commonly nesting inside outbuildings, especially old barns, towards the end of April.

Both sexes partake in the construction work. The nests are made of a combination of mud, hair and straw with open tops reinforced with saliva.

They often form small colonies as I know from the horse stables off Chalkhouse Green Lane, Emmer Green, where there is plenty of steely hair to be found.

Swallows can raise up to three broods a year, normally a brace. The parents feed the young after fledging and the little ones still bed down at night in the nest for a short while before they leave.

Their flight-call is a sort of “vit vit”, which can turn to a warning “glit glit” if a sparrowhawk or other bird of prey is spotted.

The swift (Apus apus) is a fascinating bird. It migrates in summer to our shores to breed from as far away as South Africa.

I love to hear the first “scrrreee” of the year.

With scythe-shaped wings and extremely short legs, it never perches (unlike the swallow).

Once I found one on the pavement near Reading’s Forbury Gardens, apparently unable to take off. I picked it up and launched it into the sky and off it went. Made my day.

I do feel sad that so many house repairs and new-builds have precluded this wonderful species from returning to or finding new nesting sites inside buildings (as Diana Barnett reported in her Going Green column last week).

It has become very windy. When a child, I was told that we’d have March winds and April showers. Well, that seems to have disappeared from the script as a north-westerly rattles through our trees and slams shut any open doors and windows.

Rosemary is not feeling too good and I am a bit under the weather so we have not been out and about. Hopefully, we’ll recover soon and can return to normal service.

In the meantime, at least the cats are having fun.