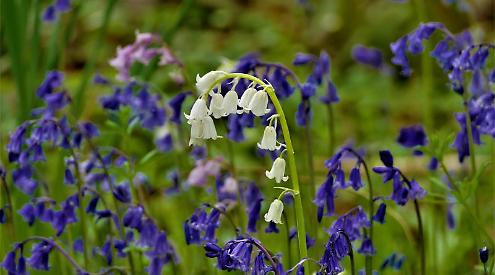 MY wife Rosemary has been feeling out of sorts for about three months due to back pain.

However, after a visit to the doctor, she discovers there is nothing seriously wrong and the problem is purely muscular and only requires some soothing gel for me to apply. Fingers crossed.

Just in case, we are not straying too far from home in Caversham for our beloved nature walks and, fortunately, there are plenty of things to see close by.

Rosemary suggests we revisit a glorious path that we last trod in February when it was full of promise with emergent plants and the trills of small songbirds. It turns out to be a great idea.

Leaving our car by the tennis club off Caversham Park Road in Emmer Green, we walk eastwards to enter the little used path that runs along one side of Caversham Park Village.

The old lane was muddy last time but has been transformed.

Hawthorns are at their best with glorious, fragant white flowers. There is nothing like springtime.

A line of oak trees seems to promise a direct route to the mythical island of Avalon. The new leaves of trees seek to garner every ounce of sunlight. Diminutive wild cherry saplings look a bit like small boys on a sports day with something to prove.

Woodland grasses add to the forest’s lower architecture. Wood melick (Melica uniflora) is most striking, as is garlic mustard (Alliaria petiolata), a member of the cabbage family.

Pink-flowered herb Robert (Geranium robertianum) pops up with impunity, the near pure white flowers of greater stitchwort (Stellaria holostea) hug tree trunks and hawkweeds glow yellow as if in a form of solar worship.

To the north side of the path we discover cuckooflower, or lady’s smock, (Cardamine pratensis), a lover of damp ground and a food plant of orange-tip butterflies (Anthocharis cardamines).

The flowers are pale pink to white, another member of the cabbage family.

Also present is what appears to be a white-flowered form of lungwort (Pulmonaria).

After a while we make it to an intriguing copse that we gave up on in February as it was extremely boggy back then. Now the path through is dry as a bone.

We come across a large badger’s sett that reveals fine, sandy soil on one of the entrances. There is much going on here and we wonder what it is like here in the dead of night.

As to the birds, we hear so many, including green and great spotted woodpeckers, chiffchaffs, blackcaps, great and blue tits, dunnocks, wrens, chaffinches, greenfinches, goldfinches and whitethroats. So lovely.

Once back home, we take a stroll through the back garden accompanied by our four rescue cats to see what’s growing. Primroses (Primula vulgaris), cowslips (Primula veris) and wood forget-me-nots (Myosotis sylvatica) have had their hours of glory and are gradually retreating. They will re-emerge next year.

Woodruff (Gallium odoratum) is in flower with dainty, small white petals. Creeping yellow pimpernel (Lysimachia nemorum) is breaking through with its yellow star-shaped flowers. It likes to live in damp woodland, as does our pendulous sedge (Carex pendula) with its spiky, attractive inflorescences.

Among our mixed native hedge, which is mostly progressing well, other flowering plants are gradually showing.

I’ve always thought that the Latin name of this colourful insect sounds like that of an Italian film star.

Elsewhere, in the central “island” of our garden, flooded with sunlight, is our considerable collection of ferns, native and exotic.

Other plants have settled in too — gound ivy (Glechoma hederacea), bluebells (Hyacinthoides non-scripta) and invasive ground elder (Aegopodium podagraria), a Roman introduction that is fortunately being strangled by woodland natives. Mind you, it is edible and nutritious.

As twilight descends, a robin sings its heart out and a male blackbird bursts into song. Although a rival some way off offers a muted reply, he’s the king of the castle and such a tuneful, melodic songster.

We are still outside as the sun dips. We discuss gardening in general and wonder why people insist on the persecution of “weeds”. As far as I’m concerned, there is no such thing as a weed, just a plant perceived to be in the wrong place.

I also dislike tidy, sterile, close-cropped lawns, one step away from being replaced with plastic grass that seems to be increasing in popularity.

Why do so many people ignore nature? This month is supposed to be No Mow May but we have been hearing plenty of noisy, fossil-fuel driven lawnmowers.

We don’t have a lawn but plenty of grasses and sedges and flowers under our shrubs and trees. Consequently, we have a myriad of insects, flies, mosquitos, beetles, ants, bumblebees, wasps, moths and butterflies and therefore a healthy population of birds and bats.

According to the charity Buglife, there has been a 60 per cent decline in flying insects in just the last 20 years.

The research method used was a “splatometer”, which recorded dead insects on car windscreens and number plates.

Where will this end? We cannot live without them.

I’m also astonished how so much land is being paved over. This practice can only increase the risk of flooding as precious rainwater will have nowhere to go other than increasingly polluted storm drains.

On a positive note, we are both looking forward to meeting up with Sally Rankin, of the Greener Henley Wildlife Group, for her wildflower walk at Mill Meadows in Henley on May 24. It’s open to all so feel free to join us.