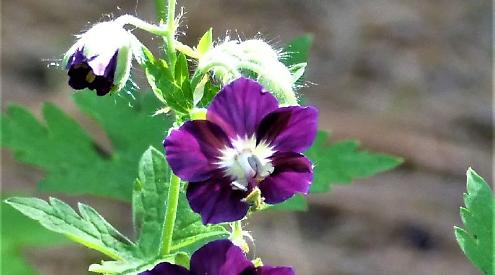 A STRANGE thing has been happening in our back garden.

Many of our saplings, including alder, oak, downy birch, wych elm, field maple and large-leaved limes, have been chomped by an invisible intruder.

Is it the Devil’s work by Reeves’s muntjac deer or leaf-cutter bees? I don’t know but it is rather distressing.

I wonder why it is that the saplings, rescued by us from precarious situations, have been targeted and not more established trees with low-hung leaves.

As a precaution, we have moved their nursery pots on to a garden table as we do not want to lose them and so far, so good. I’m sure that they will recover.

I believe the culprit is probably one or two Reeves’s muntjac deer (Muntiacus reevesi).

I may sit out one night with a powerful torch to see what is going on.

According to Britain’s Mammals, A Field Guide to the Mammals of Britain and Ireland (Princeton University Press, 2017), the muntjac is “a browsing species, taking a variety of leaves and flowers, including brambles, raspberry, ivy, bluebell, and primrose.

“This selective browsing can adversely affect the diversity of woodland ground flora and threaten the survival of some key species such as oxlip. The diet varies with the seasons: nuts and fungi are important in the autumn and winter and it sometimes grazes grasses, especially in early spring.”

I can vouch for that as our bluebells all went in a trice, just as they were in flower.

My theory is the deer have become trapped between the infill housing developments that surround us.

I feel sorry for the animals but they should not be here anyway as the muntjac is another disastrous introduction (from China) akin to that of the grey squirrel from America. The culprit could also be a leaf-cutter bee (Megachile centuncularis) but I would not have anticipated seeing any of these until next month.

How much of a difference a week makes at this time of year.

Our fly honeysuckles (Lonicera xylosteum), a rare shrub, are flowering, one in our recently planted hedgerow, others “heeled in” with some wild privet (Ligustrum vulgare).

To my mind, it is a far superior and appropriate native species than the commonly planted alien Japanese (Ligustrum japonicum).

The leaves are shiny, pale green, untoothed and opposite. The creamy white spikes of flowers exude a heavenly scent. Just like our native honeysuckle, the perfume can be heady at dusk on a warm summer’s day.

Walking around the garden, Rosemary and I spot our two black cats staring up at our giant fir (Abies grandis).

A young grey squirrel appears to be dicing with death and our black panthers are ready to strike.

After a fine display of camellias, the rhododendrons are now exuberant.

Rosemary informs me that some are rare specimens with varied coloured flowers from off-white to magenta.

Quite a display and loved by various bees, as are the tree peonies bearing deep red flowers.

A pair of common spotted orchids (Dactlylorhiza fuchsii), which were given to me by a friend a few weeks ago, have settled in well. They may not flower this year but they are looking happy — another wild addition to our ever-increasing collection of natives.

Dusky crane’s-bill (Geranium phaeum) is proliferating with its curious dark maroon flowers and pronounced “beaks”. The five to seven lobed leaves have dark blotches. We’ve no idea how these plants arrived.

Most of our trees are now in full leaf. One of my favourites, a native of China, is the handkerchief tree (Davidia involucrata). The small flowers are framed by large white bracts.

I mentioned last week the tragic demise of insect populations, so am happy to report that we have so many hoverflies, bee flies and butterflies, in particular speckled woods (Pararge aegeria) that spin around in the sunlight like crazy teenagers. We love it, as do the birds.

The front garden is full of patrolling common blue damselflies (Enallagma cyathigerum) and a contingent of holly blue butterflies (Celastrina argiolus) that seem to be enjoying themselves.

Rosemary suggests that we revisit Chalkhouse Green Lane at the northern tip of Emmer Green and enter to the side of Rosehill Riding Stables. She loved it when I first introduced her to the ancient track and the weather feels close, so I agree.

We park up in Tower Close and cross the busy B481 and make our way down the pitted, patched-up lane.

I’m happy to say that a cherished summer visitor, the swallow (Hirundo rustica), has arrived. The birds nest every year in the wooden stables, seemingly oblivious to the horses.

It makes my heart sing as they flit at speed, twisting and turning and sometimes stalling only a few feet over verdant pasture in pursuit of insects.

Other small birds announce their presence too. A great tit is looking in fine fettle and a chaffinch sings away, raising the spirits. A startling abundance of noisy starlings (Sturnus vulgaris) rattle, whistle and warble all along our way.

I note some groundsel (Senecio vulgaris) with clustered, yellow disc florets. Notionally a “weed”, it forms an important part of the fabric of life.

We head down the old track. Initially a bit muddy and rutted, the occasionally stony path broadens somewhat for a brief while.

Its history is quite apparent, the range of wildflowers and tree species proclaim its age within the first few yards. Apart from many familiar woodland grasses, we find on either side nearly finished bluebells and a rich variety of flowering plants that describe the antiquity of this small gem of a lane.

As we make a gentle descent, we stop to cast our eyes upon some little beauties — wood speedwell (Veronica montana) with four-lobed lilac flowers, bush vetch (Vicia sepium), its flowers a pale lilac-white, a surprising amount of yellow archangel (Lamiastrum galeobdolon) and white dead-nettle (Lamium album).

Some sections of the lane are very narrow, so I’m pleased when we encounter only one horse rider and back off to let him pass to the side of Chambers Copse. He canters off towards the stables.

Passing some very impressive common lime trees, we head on and meet an impressive oak tree, one of many with huge spreading branches.

We stop briefly before heading back the way we came to admire the views of the undulating land, having covered a good mile. It is so peaceful out here and the air smells good.

No yellowhammers today, which is a disappointment, but you can’t have everything on a close day like this.

We return to our car and drive home just as the heavens open. Good timing.