Beautiful riverside meadows are like our very own Garden of Eden 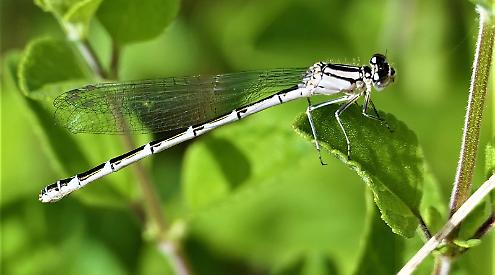 THE weather forecast is a bit mixed but Rosemary and I don’t mind as we are off to join Sally Rankin, of Greener Henley’s wildlife group, and others to explore Mill Meadows.

Before we leave home, we take a tour of our garden accompanied by our cats who are in the dog house with us.

One of them brought in a tiny blue tit chick in the early hours. I rescued it, unharmed but distressed, and released it at the top of our back garden. It could not have weighed more than a 20p piece.

Our foxgloves are showboating in full purple, mottled floral glory. The leaves of our Indian bean tree (Catalpa bignonioides) are shining in the early morning sunlight.

Woody nightshade or bittersweet (Solanum dulcamara), with its petal-like corolla lobes and torpedo-like yellow anthers, is coming along nicely in the hedgerow.

For some reason, we have some columbine (Aquilegia vulgaris) and herb Robert (Geraniium robertianum) bearing pure white flowers. Neither has been planted by us so I’ve no idea of their strange albinism or origin.

An interesting hoverfly lands on a lily leaf in our pond. It has no common name, which is understandable as there are so many. The Latin name nonetheless is Helophilus pendulus. Rosemary spots a brimstone moth (Opisthograptis luteolata), a relatively common species identified by its yellow wings with brown tips. It is a beauty.

In the front garden we admire the yellow flowers of greater celandine (Chelidonium majus) and are taken aback by the sheer loveliness of a female azure damselfly (Coenagrion puella), seemingly sunbathing. I guess that she must have come from the nearby Berry Brook.

A good start to the day and a sign that summer has begun. We drive to Henley and about 20 of us gather to embark on a walk led by Sally through some of the most delightful riparian meadowland in the South.

We are led down a narrow path from the north corner of the Mill Lane car park towards the River & Rowing Museum.

We then stop to admire a huge silver maple (Acer saccharinum), a native of America. It is a magnificent specimen with an enormous three-pronged trunk and grey bark that grows scaly as the tree ages. It bears five-lobed, distinctive leaves.

Bramble (Rubus fruticosus), which grows much bigger, will display white or pink flowers.

Some of the first plants that I notice a short distance away over the uncut grassland are the creamy-white flowers of the wayfaring tree (Viburnum lantana).

There is also an extravagant abundance of common comfrey (Symphytum officiniale). The colour of the flowers ranges from near pure white to purple.

Unsurprisingly, there are many insects about reaping a natural harvest.

Sweet chestnuts, ash and pedunculate oaks frame this small, exquisite meadow. We then head into Mill Meadows proper and, wow, what a sight. We are confronted by a beautiful riverside expanse filled with a myriad of different-coloured flowers within a broad variety of grasses, including marsh foxtail (Alopecurus geniculatus), swaying in the breeze.

The meadow is extensive and spreads all around some hundreds of yards from the river’s edge. Swirling, narrow swathes have been cut through the vegetation so it is easy to walk through without crushing the huge variety of flowers underfoot.

Apart from the attractive buttercups, there are many more flowers to admire. I have never seen such a vast collection of ragged-robin (Lychnis flos-cuculi) with its delightful five-petalled, pink flowers interspersed with daisies and red clover.

The white, tiny flowered common mouse-ear (Cerastium fontanum) and the robust, yellow-flowered hawk’s-beard (Crepis biennis) sneak into the canvas. Common sorrel (Rumex acetosa) and one of this year’s first meadow crane’s-bill (Geranium pratense), with its intense blue petals, shine through.

We come across a stunning patch of winter-cress (Barbarea vulgaris), bright yellow like the yellow iris (Iris pseudacorus) that inhabits the sides of neat little ponds, one of which is inhabited by mare’s-tail (Hippuris vulgaris), an ancient aquatic species.

In between, common reed (Phragmites australis) and either greater (Carex riparia) or lesser sedge (Carex acutiformis) rule the roost. These are handsome plants.

There are so many marsh-loving plants on show. As I say, we are only at the beginning of summer so much more will pop up between now and the early days of autumn.

Water mint (Mentha aquatica) is prolific. The flowers, which are a bushy lilac-pink, will show from July onwards and the leaves exude a strong unmistakable scent.

Hemlock water-dropwort (Oeonanthe crocata), a white-flowered umbellifer, is a highly poisonous but attractive plant that is a magnet for pollinating insects. These plants have many airborne and creeping visitors. A wasp beetle (Clytus arietis) is black-backed with the most distinctive yellow stripes and looks like a wasp.

Another insect, the beautiful, banded demoiselle (Calopteryx splendens) settles by one of the small ponds that fill this stretch of ground.

As we approach the side of the museum situated on the other side of Cold Bath Stream, we see that a hedgerow has been cut down to reveal the car park but, thankfully, not in bird-nesting season.

We make our way back to the Mill Lane car park, having had a splendid time.

Another American tree has been planted here, the pin oak (Quercus palustris). As its Latin name suggests, it likes damp ground. The leaves are distinctive and deeply divided. I do not see it as a threat to our two native species. Time will tell.

Thanks to Greener Henley and all its leaders and volunteers for gifting us all this modern Garden of Eden. I cannot think of a more dedicated group and what they are doing is beyond description. They are a lovely bunch, too.

I hope that more people will join the fight to preserve and encourage our essential biological diversity. We share this planet with so many other diverse organisms. Let us all live and thrive.