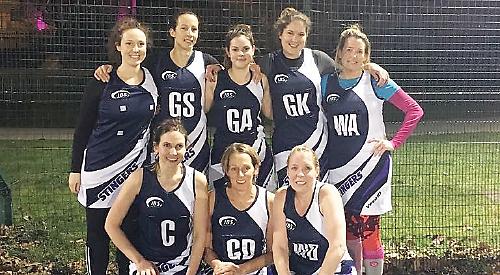 NETTLEBED Stingers lost out at home to Apple Travel Red on Tuesday night as the visitors gained revenge for their 20-13 defeat earlier in the season.

Stingers won the first centre pass and play started quickly as nerves flowed, strong support from behind came from the ever reliable Sarah Roberts (GD) and Clare McCarthy (WD) which meant the attack could drive up.

Katie Bayfield (GS) drove out of the D which meant Totie Southwell (GA) with her quick speed could drive into the D and receive the next pass to make the goal.

Emma Johnston (C) moved well into space and was always in the right place at the right time, passing the ball to Mandy Hough (WA) on the attacking wing. She then utilised the height of Katie Bayfield (GS) and passed her high balls where she slotted them in with ease.

The first half saw Apple Travel Red lead 19-10. The third quarter saw the defence step up their game as Sarah Roberts (GD) and Clare McCarthy (WD) double marked the opposition’s GA slowing her down on her way into the D where she was met with the huge lean of Chanti Stubbs (GK) but as the ball was covered the visiting shooter still had her eye in.

The arrival of the last quarter saw the Stingers digging deep as they went all out as the cheering of the supporters spurred them on.

The support on top of the D from Mandy Hough (WA) and Emma Johnston (C) was on point which meant the ball moved across the D as well as in and out of the D until it found its way comfortably into the hands of Southwell where the goals fired in. However, it wasn’t to be as the visitors triumphed 35-27.

FOLLOWING disruption to play from the weather, Nettlebed Stingers returned to action where they ran out winners against ANTZ.

Play was fast, but with the speed of Judy Goforth (C) and Totie Southwell (GA) the Stingers were quick off the mark and play started flowing.

Goforth, playing in centre, was hot on the heels of her opposition, and marked the space well and won numerous interceptions.

The combination of Emma Payne (WD), Sarah Roberts (GD) and Chanti Stubbs (GK) meant that defence was strong and even though they were met with similar height in the D, with the unrivalled lean of Roberts and Stubbs, goals were missed and rebounds won.

The ball easily found its way into the hands of Emma Payne (WD) who was ready and waiting on the top of the D for action. Mandy Hough (WA) found some good spaces and got the ball safely to the top of the attacking D where it then made its way to Katie Bayfield (GS) whose shooting was unrivalled as the Stingers ran out winners.

• A SQUAD from the Back to Netball Nettlebed Stingers team travelled to Bicester to play a friendly against the Bicester Bullets in a match that saw several players making their debuts. Play and positions were rotated over the hour-long match to ensure all got a turn on court in a match that saw Bicester triumph 35-24.