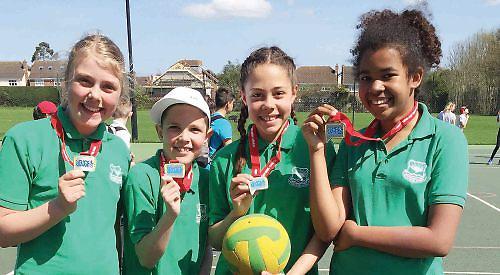 SIX girls and one boy from Year 6 of Valley Road School secured silver medals when they travelled to St Helen and St Katharine’s School to represent
South Oxfordshire in the school games High Fives final.

In all 220 teams entered the tournament and the nine finalists were to play out for the trophy in the blazing hot sunshine on Wednesday of last week.

Valley Road, playing in their green and black strip, worked hard in matches with no gaps in play.

All players had to follow a strict rotation to play each position on the court at least twice which they did well. Out of their eight games Valley Road won six — the best result being against St Ebbes, which the Henley school won 7-0 in 10 minutes of play — and only lost two narrowly. Flo Wakely, Evie Decardi Nelson and Anna McLoughlin were able to regularly pop the ball in the net and Lucy Herbert and Tom Francis made a fantastic defensive duo.