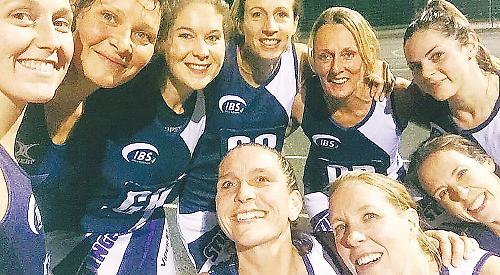 NETTLEBED STINGERS ran out narrow winners in their latest Maidenhead League match last week against Flyers, a side that finished second in Division 2 last season. The Flyers also had Louise Porter playing for them.

In the first half each team was well matched but Stingers took an early lead and were three goals ahead at half-time.

Chanti Stubbs (GK) and Sarah Roberts (GD) ensured that every missed goal was turned over to get the ball back down the court. Centre court was controlled well by Judy Goforth (C) and supported by the newest addition to the Stingers team Andrea Lamacraft (WA) who kept play flowing by keeping channels well defined. Emma Payne (WD) had a strong first half intercepting a number of balls and disrupting the Flyers play effectively.

Within the circle Totie Southwell (GA) and Katie Bayfield (GS) faced their greatest test so far this season with strong defence keeping them pinned in and restricting the ball being played around on occasion. They responded well to this and worked well together to find that elusive space.

In the second half Flyers made a change within the team and Porter was moved to GS which presented Stingers with a shooter who was getting 100 per cent of their goals on target plus moving quickly to be ready for balls coming into the circle.

Flyers took the lead at this point and Stingers had to respond with a change to play. Stingers then stepped up a gear as Clare McCarthy (WD) came on in the second half and in partnership with Sarah Roberts (GD) they ensured that Flyers shooters were kept out of the circle as much as possible.

The pressure this created was effective and reverted the play so that Stingers regained dominance of play. Stingers fought right to the end of play and despite the last ball being a penalty to Flyers in the D they managed to secure a close 23-21 win.