Stingers hit back to see off Warriors 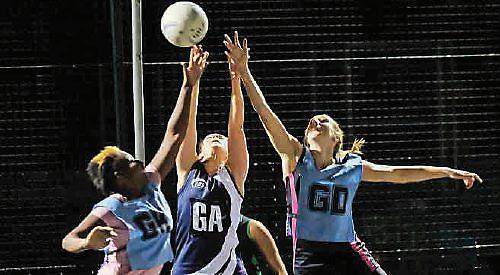 NETTLEBED Stingers had the edge in their Maidenhead and District League Division 2 clash with Whistle Warriors on Tuesday of last week.

The Stingers started well with an initial flurry of goals from Totie Southwell (GA) and Katie Bayfield (GS). As both teams settled into the match Warriors got into their stride and managed to level the score and the first quarter was drawn, 8-8.

In the second quarter there was some fast play in the centre court as Clare McCarthy (WD), Emma Johnston (C) and Judy Goforth (WA) worked hard to move the ball up to the goal third where the Stingers had plenty of shots on target.

The third quarter saw Emma Garratt coming on as GD in her debut match for Stingers, which provided additional height and fresh legs in defence. The Stingers continued to attack and defend well but were unable to close the gap and ended the third quarter trailing 26-21.

Despite trailing by five goals the Stingers showed their resilience and started the final quarter with determination. Everything came together for the Stingers and as the opposition tired they took control of the game and dominated play in all areas.

Goalkeeper Chanti Stubbs won the ball time and time again and, along with Garratt, thwarted the opposition’s attempts to score. The ball was moved effortlessly up court by the centre court players and this final quarter saw the Stingers’ shooters both in fine form as they netted 13-4 to win by four shots.

In a close opening quarter the Cyclones shaded proceedings to lead 12-10.

A quick change of positions at the start of the second quarter saw Sammy Coff move to WA and Judy Goforth switch to C. The ball moved quickly and accurately up the court to the Stingers shooters Claire Priddy (GS) and Katie Bayfield (GA) who, with good teamwork in the D and accurate shooting, scored several goals.

Good pressure with tight marking and interceptions from Stingers defenders Claire McCarthy (WD), Lydia Johnston (GD) and Sarah Roberts (GK) ensured turnovers occurred and the ball was taken up the court and converted into goals. By half-time the Stingers were leading 24-20.

Emma Johnston came on as centre at the start of the third quarter as Judy Goforth moved to WD. Interceptions, tight channelling, accurate shooting and strong defence all led to Bayfield and Priddy scoring 13 goals in the third quarter to give the Stingers a 37-30 lead.

The Stingers held firm in the fourth quarter and managed to hold off the Cyclones to win 44-34.