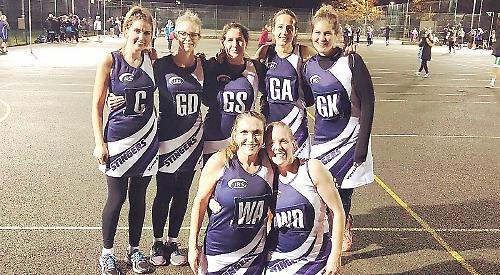 The battle between first and second-placed teams was closely fought as the match proved to be tight and remained that way until the last quarter.

Both teams played well, with Claire Priddy (GS) and Katie Bayfield (GA) impressing in the goal third, ensuring that Stingers were ahead by a small margin by the end of the first quarter.

The defence equally showed good resolve by working the space and intercepting at every opportunity. Emma Garret (GD) and Chanti Stubbs (GK) worked tirelessly in the defensive circle and with the physical strength and deep play of Clare McCarthy (WD) ensured that any stray ball made its way into the hands of a Stinger player and up to the shooting team.

By the last quarter, the game was tied, but the quick play and accuracy of Emma Johnston (C) and Judy Goforth (WA) saw the Stingers take advantage and run out narrow winners.

Claire Priddy (GS) put in a good performance around the circle in one of her best performances for the Stingers.