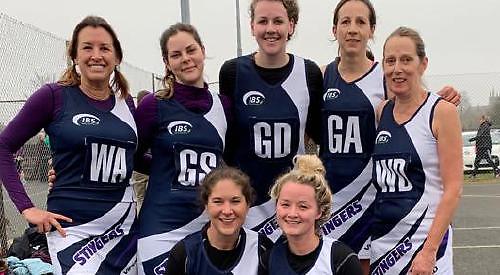 NETTLEBED Stingers got back to winning ways against Sharks in their latest Maidenhead and District League match.

Judy Goforth’s (C) speed was put to the test against the fast paced centre for the Sharks, but this didn’t stop her as she managed to navigate around the court and found space, moving the ball to the hands of the ready and running Mandy Hough (WA), who delivered strong balls to Katie Bayfield (GA) and Claire Priddy (GS).

The shooters were on fine form, moving in sync round the D and slotting the goals in with ease as the Stingers led 18-10 at half-time.

Sarah Roberts (WD) stuck to her player throughout the match, disrupting play and winning the ball back for Stingers.

Chanti Stubbs (GK) put pressure on the Sharks GS only allowing her to just enter the D. Sharks scored some long ball goals but those that were missed fell nicely in to the hands of Stubbs and Emma Payne (GD). Payne took the ball swiftly from the defensive D and cleared it up the court to the attacking end.

The Stingers kept the lead throughout the game ending with a 32-25 win to the Nettlebed Stingers.

NETTLEBED Stingers got off to a flying start with four quick goals in the opening minutes of their Reading and District League match against Laurel Park Cyclones last Saturday.

Keeping a steady pace and putting the pressure on their opponents Nettlebed kept their heads when Cyclones drew level at the end of the first quarter.

Sammi Coff (C) worked hard and kept a calm head to keep possession in Stingers favour with some good interceptions and with the defence supporting right up to the goal third the score at half time was 20-16 to Stingers.

The Stingers came out for the second half fighting from the first whistle as good movement and shooting from both Totie Southwell (GS) and Katie Bayfield (GA) extended Stingers’ lead.

Chanti Stubbs (GK) and Lydia Johnston (GD) had the measure of the cyclones attack and intercepted any passes into their shooters. Sarah Roberts (WD) and Mandy Hough (WA) along with Sammi Coff (C) took advantage of this and got the ball back up to the Stingers goal third. The score at the end of the third quarter was 36-19 to the Stingers with Nettlebed scoring 16 goals to Cyclones’ three.

Keeping up the momentum into the final quarter Stingers put the pressue on Cyclones who were penalised several times for being unable to pass within the three seconds allowed. Stingers used this to their advantage to increase their lead.

Cyclones were not giving up without a fight and some good play from their attack gave them some vital goals.

The Nettlebed Stingers speed around the circle gave them the edge and they finished winners with a score of 48-29 and Lydia Johnston once again awarded the player-of-the-match award.