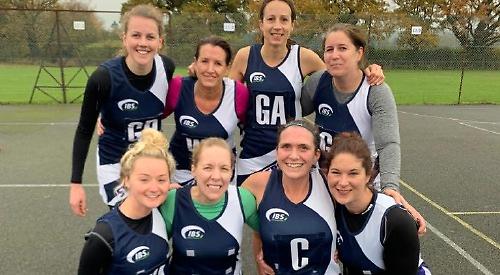 The Stingers raced into a 10-5 lead after the first quarter with good shooting from Katie Bayfield (GA) and Clare Priddy (GS). Panthers continued fighting, matching the Stingers goal for goal with a score of 19-12 at half time.

The fourth quarter saw the whole Stingers side giving their all as the centre court was dominated by Judy Goforth (C) and Sammy Coffs (WA) with some fine mazing intercepts and spacing. The defence was on top form with Chanti Stubbs (GK) and Lydia Johnston (GD) using their combined height and skill to refuse the shooters their chance of success and clearing the ball down the court to Mandy Butler (WD).

Good team work and determination saw the Stingers increase their lead, resulting in a final score of 32-25. Player of the match was awarded to Stingers Katie Bayfield (GA).

Emma Johnston (C) was on top form and made light work of the court as her calm play ensured the ball made its way to a member of the team on every centre.

Sammy Coff (WA) found space at the top of the attacking D where she was able to feed the ball into the shooters while Katie Bayfield (GA) and Claire Priddy (GS) were met with a tall defence but this didn’t stop them as they were on fine shooting form throughout the match. The first half ended 23-7 to Stingers. The shooters from Black Magic were accurate and scored some good goals from far out but Chanti Stubbs (GK) and Lydia Johnston (GD) played well as a defensive duo and were able to put them off and pick up the rebounds.

Judy Goforth (WD) used her speed and timing to pick up multiple interceptions round the centre court as the Stingers ran out winners to move into second place in the table at the half way stage of the season.