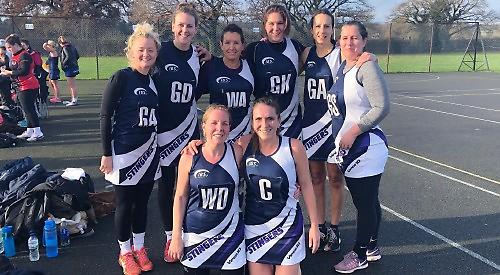 NETTLEBED STINGERS ran out winners in last Saturday’s Reading and District League clash against Basingstoke in a match played out on a chilly dry morning.

In a close encounter in which both sides missed chances the Stingers pulled ahead towards the end of the first quarter before Basingstoke came back to close the gap and trail 8-3.

By the second quarter the Stingers had settled into their match play and the passing and accuracy improved down the court. Basingstoke were clinical with their shooting and managed to overcome the height of the Stingers defence but by half-time Nettlebed had increased their lead to 23-15.

The third quarter was even as both teams continued to play for every pass and possible interception. Basingstoke and Stingers both completed some good set pieces but Stingers managed to keep the goal difference to lead 34-26.

The final quarter saw a change in centre court for Stingers as both teams came out strong and were keen to secure a win. Basingstoke scored an early goal in the quarter but by this time it was very much Stingers’ game as they pulled away comfortably with an array of long shots and passing play between the attacking players and shooters — Claire Priddy and Katie Bayfield — increasing the goal difference to 10 by the final whistle.