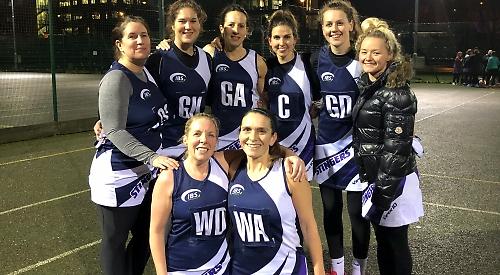 NETTLEBED STINGERS ran out winners in their Reading and District League clash against Tadley on Saturday.

The game was quick from the first whistle, with Judy Goforth (C) and Sammy Coff (WA) were on fine form and they moved around the court with speed and agility offering good support across the court.

Claire Priddy (GS) and Katie Bayfield (GA) settled into the game nicely and started getting the goals as the first quarter ended 8-7 to Nettlebed.

The Stingers’ defensive trio of player-of-the-match Chanti Stubbs (GK), Lydia Johnston (GD) and Emma Payne (WD) meant that the opposition’s score line was kept at bay, as they picked up rebounds, interceptions and applied the pressure, as Nettlebed led 14-9 at half-time.

The wind picked up in the third quarter meaning that both teams had to reassess their choice of pass. Tadley made a switch to their defensive line-up and the Stingers struggled to get the ball to the attacking end. Tadley pulled the score back to be 18-17 to Stingers at the end of the third quarter.

In the final quarter Totie Southwell came into the goal attack position and with an injection of fresh energy on court the final score was 29-21 to the stingers.

IN their Maidenhead and District League clash with Zentax, Nettlebed Stingers ran out comfortable 31-13 winners.

A fast first quarter saw both teams battling it out for goals. Stingers defenders Lydia Johnston (GD) and Chanti Stubbs (GK) played well in the circle, putting pressure on Zentax shooters and fighting for rebounds. Stingers took an early lead after the first quarter, ending with a score of 9-3.

During the second quarter Zentax started to settle and communicate well as a team making it difficult for the attackers to feed the ball into the circle but this resulted in some fine play from Stingers centre court players Emma Johnston (C), Judy Goforth (WA) and Clare McCarthy (WD) becoming an unstoppable force leading into the third quarter.

The final quarter saw Stingers continue with their momentum facing a formidable defence from Zentax but managing to secure a 31-13 victory.