Women walking back to happiness on netball court 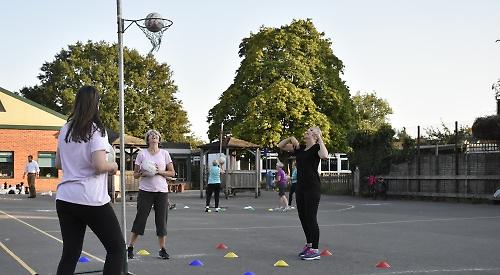 A GROUP of women have resumed their weekly netball sessions in Sonning Common after eight months.

They had to abandon the get-togethers when the coronavirus lockdown was imposed in March.

Now they have re-started their evening training sessions in the playground at the village primary school. Up to 25 women of all ages and abilities take part.

The women completed their second hour-long session since returning on Monday.

Amanda Watkins-Cooke, who runs the group, said: “It was brilliant being back and there was a great atmosphere. The women really enjoyed socialising again.

“We were due re-start our sessions in May but obviously covid curtailed our plans.”

Sophie Snowden, 20, of Kennylands Road, Sonning Common, said: “It’s nice to be back and be socialising with everyone, though at a distance.

“I stayed fit throughout lockdown but it’s nice to do it with others and be part of a sport. I was worried it was going to be cancelled but we found it would work as it’s a socially distanced sport. It’s nice to be involved with something in the community.”

Lesley Thomas, 49, from Earley, said: “It’s fantastic to be back. It stops me going home and drinking wine!

“I managed to stay fit during the lockdown by going running, which I started due to Amanda getting us going beforehand.”

England Netball, the national body that oversees the sport, published covid safety guidelines for players and groups to resume safely.

Social distancing must be observed and every player must have their own ball, which is sanitised at the end of each lesson.

Mrs Watkins-Cooke reminds her players of the guidelines at the start of each of her sessions, which focus on fitness and netball skills and also include some socially distanced games, such as “netball rounders” and “killer”.

She said: “It is fantastic to be back and delivering netball again but in a slightly different way.

“Getting back to some form of normality is so important to us all, not only in terms of health and fitness levels but also for mental wellbeing.”

The group began in November at Kidmore End Memorial Hall.

Mrs Watkins-Cooke explained: “My husband Howard plays for Sonning Common Cricket Club and one day us wives were sitting watching the men play and began discussing how we would like to play netball.

“We decided on walking netball as it is accessible to a wider range of age groups and abilities.”

The group moved to the primary school when the number of women taking part increased. Before the lockdown, Mrs Watkins-Cooke also launched a running programme called Zero to 20 designed to help the women maintain and improve their fitness outside the netball sessions.

This was similar to the app Couch25k, which helps inexperienced runners build up their stamina.

However, the runners only managed three runs before the lockdown was imposed.

Mrs Watkins-Cooke also runs Active Leaders, a leadership course for young people, which was set up in 2016.

Penny Snowden, who founded Active Leaders, is among the women in the netball group, as is her daughter Sophie.

The netball group meets at Sonning Common Primary School in Grove Road every Monday from 5.30pm to 6.30pm.