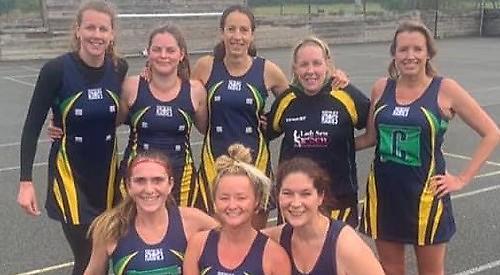 HENLEY HAWKS went down to defeat in their latest Division 1 Reading League match against VOLUME.

Henley fought hard to make crucial interceptions and work the ball down to the attacking end but ended the first half trailing 18-13.

Volume stepped up their defence, efficiently deflecting the ball away and back down court as they led 30-16 going into the last quarter.

Hawks fought valiantly till the end but could not close the gap as they went down 39-19.

In the Maidenhead League HENLEY HAWKS ran out winners in their Premier Division clash with BUSINESS MOVES.

From the first whistle it was evident that the Hawks were facing two strong shooters. This didn’t deter the Hawks defence as Emma Payne (GK) and Lydia Johnson (GD) held strong in the circle, defending shots and working well with Clare McCarthy (WD) to get the ball back into attack. The first quarter ended 8-6 to Business Moves. The Hawks attack moved well across the court in the second quarter as Judy Goforth (C) played hard and fast, offering solid support for both defence and attack whilst Sammy Coff (WA) continued to push hard, holding space and forcing errors from the opposition. Going into the third quarter Hawks were five goals down but still determined to fight for victory. Chanti Stubbs (GS) and Totie Southwell (GA) read each other well and the shots started dropping in as Hawks finished the quarter only one goal behind, 24-23.

With strong support and guidance from head coach Lou Porter, the Hawks stepped up a gear and through sheer determination and good teamwork the Hawks scored 12 more goals to triumph 34-33.

In Division 4 HENLEY HAWKS 2nds lost out to RED ROCKETS.

Belle Tebbutt (GA) and Louise Todd (GS) immediately scored good goals for the Hawks as the pair worked hard together throughout the match, creating space for Sarah Filby (C) and Bea Barefield (WA) to deliver passes into the scoring D.

Red Rockets picked up the pace going into the second quarter and fought back, never missing a scoring opportunity which left the Hawks trailing at half-time.

In the third quarter the Hawks came out fighting with Sophie Benest added into the attack. The defence duo of Bethany Caunter (GK) and Jodie Curran (GD) worked well together and pushed hard to get the ball back down court at every opportunity.

Moving into the fourth quarter the Hawks went from strength to strength. Nikki Stubbs (WD) was in fine form, speeding across the court to make numerous interceptions throughout the game.

Despite some good play, it wasn’t quite enough for the Hawks to secure that elusive first win as they went down 36-23.