Hawks side get off mark with first win 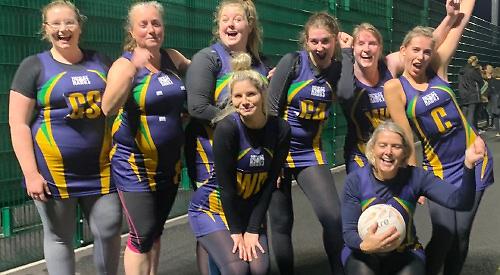 HENLEY HAWKS lost out in their latest Maidenhead League Premier Division clash with PHOENIX PINKZ on Monday of last week.

The Hawks started strongly with play end to end with Katie Bayfield (GS) and Totie Southwell (GA) matching their opponents goal for goal. This resulted in the teams ending the first quarter 8-8.

Hawks continued to move the ball well in the second quarter with Emma Payne (WD) making some good interceptions. Chanti Stubbs (GK) and Lydia Johnston (GD) worked hard together defending well against some strong shooting opposition but by half-time the Hawks trailed 14-13.

The third quarter was brought to an abrupt halt as one of the umpires was taken ill. After a replacement was found, it was clear that Henley had lost momentum and struggled to get back into the rhythm of their game. Claire McCarthy was brought into the WD role and worked hard alongside Judy Goforth (C) and Sammy Coff (WA) to win possession for the Hawks.

Unfortunately, by the fourth quarter there was no stopping their opponents who had picked up the pace as they went on to win 29-23.

On Wednesday in Division 4, HENLEY HAWKS 2nds recorded their first win of the season as they beat BLUE MAGNETS 2nds
28-11.

Belle Tebbutt (GA) and Lauren Maddock (GS) were in fine form for the Hawks as the shooters took every opportunity presented them to lead 8-3 at the end of the first quarter.

In the second quarter the defensive trio of Bethany Caunter (GK), Helen Hanley (GD) and Juliet Machan (WD) worked hard together only letting in one goal as the Hawks stretched their lead to 13-4.

The Hawks continued to play well in the third quarter as Holly Maddock was added into the mix. Playing alongside Sophie Surman (C) and Sophie Benest (WA) they moved the ball down efficiently down court to the Hawks shooters who didn’t miss an opportunity.

By the fourth quarter the Hawks were clearly the dominant team. The whole team fought hard until the end as they continued to make crucial interceptions to win the match 28-11.