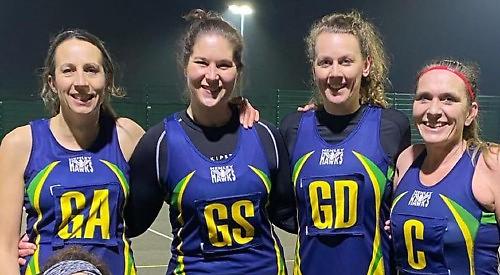 The Hawks started off strong with Emma Payne (GK) and Lydia Johnston (GD) working well together, marking the opposition close and preventing scoring opportunities with good interceptions, only conceding six goals in the first quarter.

This momentum continued into the second quarter as the Hawks worked the ball well down court and maintained the lead, 18-12 at half-time.

The Hawks confidence grew through out the match. Chanti Stubbs (GS) and Katie Bayfield (GA) used their height to their advantage and scored some impressive goals, furthering the lead by another 11 goals going into the final quarter.

The centre court players Judy Goforth (C), Sammy Coff (WA) and Clare McCarthy (WD) worked beautifully together through out the match creating great space and continually moving to work the ball back into the scoring D. Even though the Mavericks valiantly fought back in the final quarter, the Hawks held strong for the victory.

In Division 4 HENLEY HAWKS 2nds went down to an 18-10 defeat against CHERRY BOMBS.

In the first quarter the Hawks struggled to get off the mark as Belle Tebbutt (GA) and Lauren Maddock (GS) faced a tough defence. Cherry Bombs pushed hard and scrapped for possession as they led 6-1 after the first quarter.

The Hawks battled to get back into the game and started to find their feet as the defensive trio of Sarah Kenyon (GK), Juliet Machan (GD) and Bea Barefield (WD) worked hard to win the ball and made good interceptions as they trailed 11-5 at half-time.

In the third quarter Louise Todd was moved into centre position alongside Nikki Stubbs (WA) and Sarah Filby into GD. The teams appeared more evenly matched and the Hawks were now only five goals behind at the end of the third quarter, 14-9.

The Hawks continued to fight hard for posession in the fourth quarter but the goals just wouldn’t go in for Henley as they went down by eight goals.