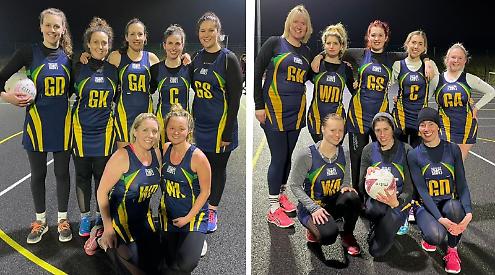 In a tense game Henley led by three goals at half-time.

Henley continued to push hard in the second half and were leading 26-19 at the end of the third quarter.

However, Volume fought back in the final quarter with a relentless attack to claim a share of the spoils.

In Maidenhead and District League action HENLEY HAWKS ran out 39-24 winners against REDBACKS.

The teams were evenly matched in the first quarter with Redbacks leading 9-8. The defensive duo of Emma Payne (GK) and Lydia Johnston (GD) worked well together in the second quarter to thwart the opposition.

The Hawks pushed hard to get the ball moving back down the court which resulted in Henley going into the second half with a three-goal advantage, 16-13.

In the second half Henley dominated the court with Emma Johnston (C) making her return from maternity leave. The Hawks created space down the court and worked the ball down the wings into Sammy Coff (WA) and Clare McCarthy (WD) as they led 27-18 going into the final quarter.

The momentum for Henley continued in the final quarter with good shooting from Katie Bayfield (GA) and Chanti Stubbs (GS) as they eased to a comfortable win.

The pace of the game was frantic from the whistle as the teams matched each other goal for goal in the opening minutes.

Henley moved the ball well with Sarah Filby (GD) and Sarah Kenyon (GK) working hard in the shooting D to prevent scoring opportunities as Henley led 7-4 at the end of the first quarter.

In the second quarter Blue Magnets picked up the pace and were making some good turnovers. Louise Todd (WA) and Holly Maddock (WD) moved swiftly down the wings and tried to create space for Henley to attack but the ball just wouldn’t go in for the Hawks as they trailed 11-9 at half-time.

In the second half the Hawks brought Jodie Curran into defence. The team continued to work the ball well with Sophie Surman (C) creating space and making herself available for every pass.

Going into the fourth quarter Henley were still trailing but they scrapped for every ball, working well together down the court and into the attack.

Izzy Tebbutt (GS) kept her composure and made some fine shots for Henley with the strong support of Bea Barefield (GA) as they managed to grind out victory in the last minutes of the match.