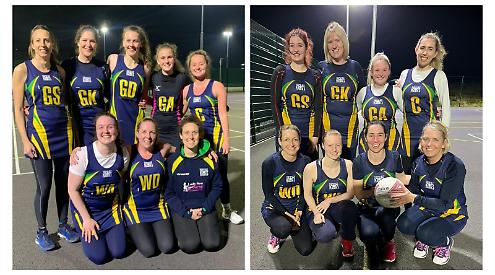 HENLEY Hawks ended the season in style with double victories.

The Premier Division team beat Swifts who top the division in the Maidenhead & District League.

The first quarter set the pace of the match as Henley edged into the lead with some brilliant shooting from Katie Bayfield (GS). The team pushed hard to maintain the lead with Sammy Coff (C) taking control of the court and helping to hold the four-goal advantage.

The defensive duo of Chanti Stubbs (GK) and Lydia Johnston (GD) worked brilliantly together throughout the match to make crucial interceptions as Henley furthered their lead. The score was 28-20 to the Hawks at the end of the third quarter.

In the fourth and final quarter, Henley maintained their control of the game with Hannah Robertson (WA) and Clare McCarthy (WD) moving the ball swiftly down the wings into attack. The whole team kept up the pressure which led to a well-deserved win and final score of 33-25 to Henley Hawks.

The result should be enough to secure Henley Hawks’ place in the Premier Division for next season.

Meanwhile, Henley Hawks 2nds added to the celebrations with an incredible win against the top team in Division 4, Maidenhead Mystics.

The team continued to push through the second quarter with Sophie Surman (C) and Louise Todd (WA) working well together in attack, creating good space to move the ball to the Hawks shooters. The Hawks went into half-time with a lead of 20-14.

In the second half the opposition came out fighting.

Play was frantic and Henley’s lead was slowly reduced but the Hawks’ defensive trio of Nikki Stubbs (WD), Sarah Filby (GD) and Sarah Kenyon (GK) held strong and the team battled for every ball. Going into the final quarter with a 24-20 advantage, the Hawks remained in control despite intense pressure from the opposition.

The defence caught every rebound and moved the ball back into attack to Henley’s shooters who kept their composure and scored crucial goals to secure an exciting victory. The final score was 30-25 to Henley Hawks 2nds, a fantastic end to a hard-fought maiden season. The team have come a long way.

Team spokeswoman Jodie Curran said: “The hard work in training is paying off and the improvement from every player has been incredible to
witness.”