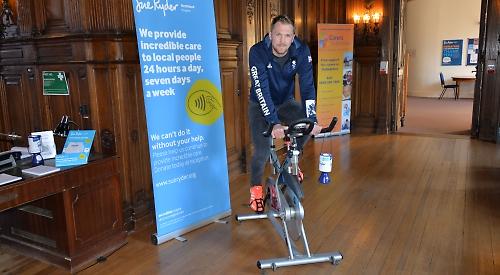 Fund-raiser Margaret Thomas came up with the idea of the 1,000-mile spin bike challenge as part of the charity’s Just One Thing campaign for January in which people are asked to do something to help raise money.

Volunteers, visitors and staff will be asked to cycle one mile at a time on a stationary bike, loaned by Angie Best’s Metaphysical Gym at Henley Business School, in the reception area at Joyce Grove. The idea is to complete a total of 1,000 miles — the total distance between Sue Ryder’s seven hospices and five neurological centres across the country.

A collection box will hang from one of the handlebars for people to make donations.

Gregory, who used to live in Nettlebed and now lives in Ipsden, cycled the first mile on Tuesday.

He said: “I used to live 500m from the hospice and wanted to support my local charity.  This is only one small thing but it can make a big difference when they’re all added up.”

The Leander and GB rower, who won gold at London 2012 and Rio 2016, added: “I came and had a look round the hospice and it blew me away as they explained what goes on here and about how they help people and their families.

“The passion people have for the charity is pretty inspiring.”

Mrs Thomas said: “By having the exercise bike in our reception, staff and visitors can help us raise money. One small action can make a big impact. We decided on the 1,000-mile target as this is the distance between our seven hospices and five neurological centres, so that will provide us with the motivation to reach it.

“Our aim is to raise more than £1,000 from this activity and we’d love for people to pop along and get involved. Even if you don’t want to cycle, you could drop £1 in our collection bucket.

“As well as helping us fund-raise, it will be an opportunity to learn a little more about the services we provide.”