Hospice helped me cope with losing mum and dad 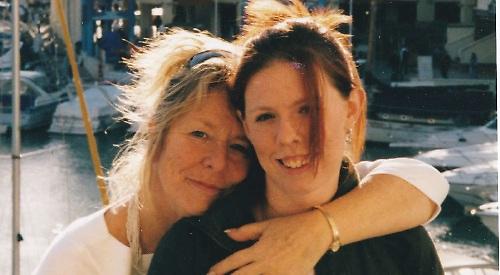 KELLY WILLIAMS lost her parents within two months of each other earlier this year.

As she approaches her first Christmas without them, she takes comfort from knowing they were well cared for in their final weeks.

Steve and Kay Landau, from Shiplake, were both in the Sue Ryder hospice in Nettlebed, where they were made as comfortable as possible by the kind, supportive staff.

Mrs Landau, who had a brain tumour, passed away in February. Her husband, who had liver, stomach and oesophageal cancer, followed in April.

The couple, who had been married for almost 40 years, were both just 66.

They both spent the last three weeks of their lives at the hospice but had been helped by the charity for months before that.

Their daughter, who lives in Blewbury, near Didcot, was initially sceptical about the hospice’s involvement in her parents’ care.

Mrs Williams, 36, one of two daughters, says: “At first I didn’t like it because of the word ‘hospice’.

“Hospice means ‘death’ to everybody but, actually, it’s not like that — they just want to support you. It’s not the dreaded place that people think.

“To be honest, none of us knew how amazing they are at the hospice — they were there for you whatever.

“I’d be struggling a lot more now if mum and dad hadn’t passed away there. Even though death is so awful that place makes it like it’s not a bad thing, if that makes sense.

“It was so peaceful. There’s not the noise you get in a hospital or the running around.”

Mrs Landau was diagnosed with the tumour in May 2013 and others were found on her spine. Her husband was diagnosed around September 2014.

The couple had chemotherapy treatment at the John Radcliffe Hospital in Oxford and Spire Dunedin Hospital in Reading.

Staff at the hospice got in touch with Mrs Landau after her GP passed on her details and they would regularly visit her at home in Lashbrook Road if she needed someone to talk to.

Mrs Williams explains: “She wanted to protect me and my sister Laura so talking to them about her worries helped. She needed to be told that me, my daughter Millie and my sister would be okay.

“I would turn up at the house and there would be somebody there. It was more the psychological support mum needed.

“If she was having a really bad day she would ring up and someone would talk her through the medical and mental side of it. I’d come home and ring every night and when she was a bit happier you knew she’d had a phone call from someone telling her things would be okay.

“If they hadn’t heard from mum in a week they would drop her a line to check she was all right. They always let you know they were there but not in an invasive way.

“Mum still had a few years left in her and they wanted to help her through things and make them the best for her.

“It helped dad as well, to be honest. If mum was in terrible pain he could ring them up and someone would come out. It meant he wasn’t on his own looking after mum.”

Her mother was also able to have blood transfusions at the hospice as she didn’t want to return to the Royal Berkshire Hospital in Reading.

“She’d had a few in hospital and just didn’t want to go back in for another,” says Mrs Williams.

In January Mrs Landau had to be taken to the hospital because she was having problems swallowing and slurring her speech but the family took the decision to discharge her.

“I wanted her to be peaceful and calm and relaxed like it was at Sue Ryder,” says Mrs Williams.

“We rang them and they said they might have a space for her and they did. As soon as you walk in the building it melts away that horrible feeling. There’s people that want to work there, they are not just there for a job.

“They had time for mum — the kitchen staff, the nursing staff, the doctors. They have time, that’s the big difference, and it’s free. We didn’t pay but the service they give is just outstanding. They gave mum physiotherapy, massages and someone did arts and crafts with her.

“They knew your name as well, which sounds silly, but you’re not just another patient. It’s the little things like that when you’re in that situation and it means a lot.

“We were there as much as we could be but you have to have a break sometime. They have an apartment up there for relatives and I’d go there and have a cup of tea.

“We could go out for an hour and walk around the gardens — you can’t get that at a hospital — or we could take mum to the apartment just for a change of scenery.

“I could walk away at the end of the day and come home and relax because mum was being looked after. If I needed to ring at 2am I knew I could and wouldn’t get a moan or someone tutting at me.”

After a week-long holiday, her daughter returned to find her father’s health had deteriorated, so she took him to the oncologist only to be told he, too, was terminally ill.

“I’m convinced the stress from mum brought it on,” says Mrs Williams. “To be honest, none of us knew how serious it was with dad. It was all very quick.

“Because he had cancer in his oesophagus he couldn’t swallow very much. He rang Sue Ryder last summer and spoke to a dietician to come up with a menu of foods that wouldn’t aggravate it.”

Mr Landau was an accountant and managing director of a vehicle leasing business.

His daughter said: “He refused to go for any counselling. Because he was a businessman, he didn’t do that sort of thing. You didn’t talk about that sort of thing with strangers. He knew they were there to support him and mum — that’s what he needed most, just knowing someone was there.”

Following her father’s diagnosis, Mrs Williams and her sister moved into their parents’ home but soon found they needed help.

She says: “We called Sue Ryder and they said, ‘give us two hours, we’ll make a room up for you and bring him up’. As soon as we went in everybody said, ‘Kelly, what are you doing up here so soon?’ It was making light of the situation as a distraction.

“As I walked through the doors with dad it was quite emotional. They helped dad, let me get myself together and then took me in to see him.

“I didn’t have to go near the room where mum had been and see somebody else in there. It had only been a few weeks and it was too raw.”

Mrs Williams says her father found great comfort in talking to a spiritualist at the hospice and he was made to feel comfortable in other ways.

“One of the doctors also bought some non-alcoholic beer and they went and sat together and had a beer,” she says.

“Dad rang me at 2am one night and wanted me to go up there. The staff took the phone off him and said, ‘Kelly, don’t worry, it’s fine, we’re looking after him’.

“I didn’t feel I had to get into the car and drive there because they were there for him.

“If Laura and I had a question about what was going on with dad’s body they would answer it for us.

“It wasn’t just about dad, it was about me and Laura as well. They supported both of us amazingly. That was important — we’re the ones who were left behind.

“He was up there for three weeks. He died on April 26, exactly two months after mum.”

“I go up there quite often because I get comfort from it,” she explains. “I like it — I walk in and it’s like ‘Hi, Kelly’. I go and sit in the day hospice and have a cup of tea. They encourage it actually.”

In October Mrs Williams raised £19,000 for Sue Ryder with a ball at Phyllis Court Club in Henley in memory of her parents.

“Raising that money was fantastic but it’s not enough, they need more,” she says. “Hopefully, this is going to make people more aware of the amazing stuff they do.

“I’m immensely thankful, I can’t thank them enough. They have made the whole grieving process a lot easier for me because it was what we wanted — it was peaceful. We weren’t made to make any choices we didn’t want to make.

“I try to live a normal life now for my little girl but if mum and dad had gone into a hospital I think I’d still be struggling months on. People I know can’t believe how well I’m doing. I put it down to Sue Ryder.

“Before mum and dad, I didn’t have a clue what Sue Ryder did. I knew it was a hospice but I didn’t have any idea what they did up there. I can’t express enough how amazing every single person there is.”