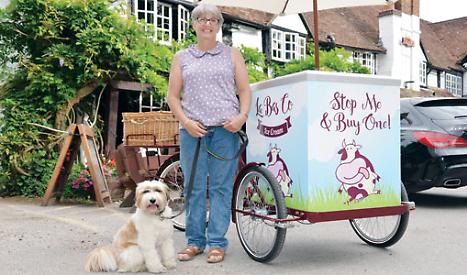 A WOMAN has turned her back on the corporate world to become an ice-cream seller.

Kathy Drogemuller runs her business La Bas Co from a specially-adapted tricycle which she rides to private functions and public events throughout the Henley area.

The £3,000 vehicle includes a parasol and a battery-powered freezer which can be charged from the mains overnight. She sells ice cream by Joe Delucci’s, an Italian supplier.

Mrs Drogemuller, who lives in Sonning with her husband Tony and grown-up children Steph, Alex and Chris, decided to pursue the venture on a full-time basis after being made redundant from her IT job at Lego’s offices in London in April.

It is named after Basco, her two-year-old Tibetan terrier. The logo and artwork were designed by a friend from Slough who works as a graphic designer.

The 55-year-old bought the tricycle from a specialist supplier last year and attended a number of events over that summer, including the Reading Festival and Sonning Cricket Club’s president’s day match, as well as selling ice creams outside her village pub The Bull.

This year she is once again selling outside the Bull and attending a number of private functions including several weddings.

Mrs Drogemuller will also set up shop at motorcycle rallies in and around Reading as she is a keen motorcyclist. She owns a Harley-Davidson and volunteers as a “blood biker” shuttling blood between hospitals in Oxfordshire, Berkshire and Buckinghamshire.

She is also seeking the Environment Agency’s consent to sell from a section of the towpath near Sonning. If this is successful she will do so between April and September next year.

Mrs Drogemuller grew up in Woodcote Road, Caversham, and later moved with her family to Canada, where she set up a business importing British goods for expats who missed them. They moved back to Goring in 2007 then to Sonning in 2010. She said: “I’ve always had a bit of an entrepreneurial spirit and thought this was a natural way to pursue it. Sonning doesn’t have a village shop as property is so expensive and, in the long run, I love the idea of running something similar from a boat.

“In getting this off the ground, I’ve discovered there’s a lot of red tape involved and it’s taken longer than I expected for the Environment Agency to complete my application.

“It’s been a learning curve but it’s slowly taking off and I think next summer will be my first ‘big year’. I was hoping to sell from the Sonning towpath this summer but because of the delays it would no longer be worth the cost.

“It’s a bit of a setback and somewhat disappointing but it’s about having a long-term view, as I learned when I set up my business in Canada. Sometimes you just need to get yourself out there so that people remember you and come back for more.

“I started out selling lots of different ice creams that were well-known but now I’ve scaled it back and am selling something people can’t get anywhere else. It’s a bit different and the feedback I’ve had so far has been very positive.”

Mrs Drogemuller, of High Street, rides the bike to events if they are nearby but must transport the freezer separately in a car if they are further away. Her husband, who is a tax consultant, helps her with this and sometimes spends the day serving customers with her, as do her children.

She said: “The first time I went out with it, I hadn’t realised how heavy the freezer was. I was going downhill and had picked up so much speed that the brakes were useless and I had to career into the kerb as gently and gracefully as possible!

“Being made redundant spurred me on to do this and I think it will ultimately be a positive move. It will be very fulfilling to run my own business and be out there meeting people and chatting with them as they walk down the towpath.

“I will be very glad to get away from that corporate world, where the whole world can be pulled out from underneath you at a moment’s notice. I’ve had a lot of support from my family and hope this will be an exciting new stage in my life.”