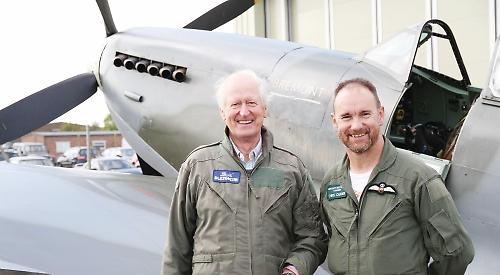 A MAN celebrated his 80th birthday with a flight in a Spitfire.

John Hives, who lives in Nuffield with his wife Frances, experienced a barrel roll in a two-seater version of the Second World War fighter.

The flight was a gift from his children, son Mark, daughters Jacqueline Jarvis and Paula Foxley, and grandchildren, who include Olympic silver rowing medallist Olivia Carnegie-Brown.

Beforehand he met staff from the Aircraft Restoration Company, who showed him and 12 members of his family around the hangars where they restore classic aircraft, including the last remaining Lancaster bomber in Europe.

He was then briefed by his co-pilot Chris Carder before take-off.

The Spitfire was powered by the original Merlin engine designed and developed by his great uncle Ernest Hives at Rolls-Royce, who was knighted for services to the company and country. Mr Hives, whose actual birthday was in March, described the 20-minute flight as “fantastic”.

He said: “We flew low over the airfield a couple of times because the family was there watching.

“Having never done anything like that before, you have to get your mind around it and accept that the manoeuvres the pilot does are obviously safe but it’s a bit extraordinary for an amateur like me!

“I suppose the most extreme was a barrel roll. Before we went up I said I didn’t want any dramatics or aerobatics but one of my sons-in-law is a pilot and he’d obviously had a quiet word and said, ‘show him what the Spitfire can do!’”

He said it was cramped and “fairly basic” in the cockpit, adding: “How these pilots used to fly these aircraft in combat conditions... but it did the job at the time.

“It’s an important plane but because of our family’s connection with Rolls-Royce it was pretty special. I think that’s why the family thought it was an ideal opportunity.”

Henley luxury watchmaker Bremont sponsors the Spitfire and has its logo on the fuselage.