Col Phillip King OBE, who served in the army for 36 years 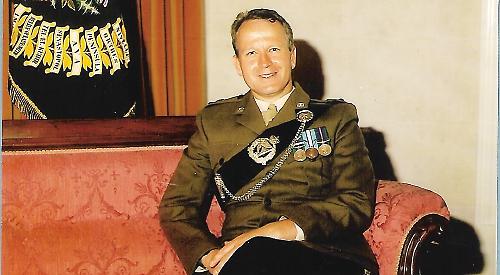 PHILLIP KING, who won the Queen’s Medal for best student in June 1979 at the Royal Military Academy Sandhurst, died on January 22 after a short illness. He was 57.

He was born and lived in Harpsden Road, Henley, and attended Gillotts School.

Philllip joined the army as an officer cadet in 1978 and during the course of his army career rose to the rank of colonel.

As well as receiving the Queen’s medal, which is awarded to the British army officer cadet who achieved the highest scores in military, practical and academic studies, he also won the Special Prize for Strategic Studies, the Narrien Cup as the student placed first in the academic order of merit and the Infantry Prize while training as an officer cadet.

During his army career, Phillip served in the (then) Duke of Edinburgh’s Royal Regiment and later commanded the 4th Battalion, The Royal Irish Regiment.

He served in Northern Ireland, Bosnia, Iraq and Afghanistan.

After retiring in 2014, Phillip worked for the Thames Valley Police and crime commissioners’ complaints, integrity and ethics panel and as a trustee of the Royal Berkshire Regiment at the museum situated at the Wardrobe in Salisbury.

In May 2015, he was elected as a Conservative councillor on Bracknell Forest Council, representing Central Sandhurst and Sandhurst Town Council.

Phillip died of cancer at St Elizabeth’s Hospice in Ipswich.

He is survived by his wife Janice and two daughters, Philippa and Alexandra, and two granddaughters.

He is also survived by his father William King, sister Elisabeth and brother Andrew.

Phillip was the great nephew of Alfred William King, the first man from Henley to be killed in the First World War.

Alfred was in the 1st Battalion of the Royal Berkshire Regiment and was part of the British Expeditionary Force 6th Infantry Brigade.