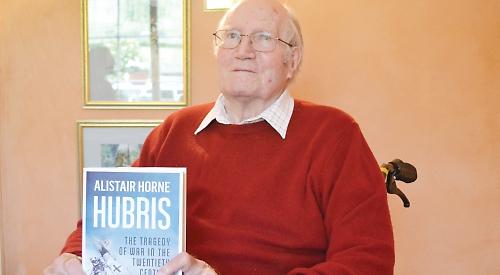 He wrote many acclaimed works, including travel books, works on 19th and 20th century France and Germany and political biographies.

His own life was described in two volumes of a memoir, A Bundle from Britain (1993), chronicling his adventures as a young boy when he was sent to America to escape the Blitz, and But What Do You Actually Do? (2011) about his later years.

Both his parents died in road accidents and he himself endured three bad car crashes.

He also underwent a triple heart bypass, suffered a stroke and survived an encounter with a 500lb bear.

Alistair Allan Horne was born on November 9, 1925, the only child of Sir Allan Horne and Auriol, née Hay-Drummond, niece of the 13th Earl of Kinnoull.

Lady Auriol died when Alistair was five, drowned when her car spun off a road into a Belgian river.

Her husband died 13 years later when he was knocked down and killed by a car in the London blackout.

Alistair was educated at Ludgrove School and then the Swiss school Le Rosey followed by Stowe. At the outbreak of war, he was shipped to America.

He was 14 when in July 1940 he landed in New York where he lived with the Cutler family, who sent him to Millbrook School.

There he befriended William F Buckley Jr, the conservative author and commentator, who remained a lifelong friend.

He returned to Britain in 1943 where he hoped to serve as a Spitfire pilot but, due to his poor eyesight, he became an RAF squaddie instead.

After a few strings were pulled, he joined the Coldstream Guards, eventually becoming a captain at age 22.

Posted to Palestine, Horne was put in charge of intelligence gathering under the future head of MI6 Maurice Oldfield. After the war he was transferred to the Intelligence Corps and attended training school in Surrey. As a subaltern of 21, he was based in Cairo monitoring Soviet satellite powers in the Balkans.

He returned briefly to spying in Tito’s Yugoslavia, then in 1952 joined the Daily Telegraph as a junior correspondent in post-war Berlin and Bonn — a job he got by falsely claiming he could speak fluent German.

A year later he was approached by Oldfield who wanted him to run three agents for MI6, all of whom worked in sensitive posts in various Bonn ministries.

For a couple of years Horne was filing copy to the paper while transporting secret West German government documents to MI6 handlers in a suitcase with a false bottom.

In 1955 he was telephoned by the Telegraph’s night editor and told to find out what time the Rheingold Express, carrying two au pairs for Lady Pamela Berry — the wife of the newspaper’s chairman — was due to arrive. Horne replied advising that she should contact train inquiries at Victoria station herself.

In response, he was ordered back to head office in Fleet Street and resigned. His career as a spy also ended.

Horne then embarked on a new career as a historian.

His first book, Back in Power: A Report on the New Germany (1955), was greeted positively. His second, The Land is the Bright (1958), was intended to repair Anglo-American understanding after Suez.

Horne’s next book, regarded as a masterpiece, was about the battle of Verdun, The Price of Glory (1962), which won the Hawthornden Prize. A vivid account of the calamity of 1870 followed in The Fall of Paris (1965).

In 1971 he visited Salvador Allende’s Chile with William F Buckley and wrote Small Earthquake in Chile (1973), another travelogue.

Then, at the suggestion of Harold Macmillan, he wrote a history of the Algerian civil war, A Savage War of Peace: Algeria 1954-62 (1977), which received the Wolfson Prize.

Macmillan then recruited Horne as his official biographer. He spent 10 years writing the work and published it in two volumes in 1988 and 1989, revealing that Macmillan’s decision to resign in 1963 had been a mistake.

The former prime minister explained that he was a hypochondriac and had convinced himself that he had cancer, which forced him to resign. He didn’t have cancer and he lived another 23 years.

In 2007 Horne was invited to the White House to talk about his book on the Algerian war which, following the American invasion of Iraq, had generated interest among military officers.

After his visit, he was invited to write an official biography of Henry Kissinger but declined because of age and the amount of work involved. Instead he wrote a volume on one year in Kissinger’s life, Kissinger: 1973, The Crucial Year (2009).

Horne loved to travel and during a visit to Canada, he was lucky to escape with his life when a black bear ripped a duffel bag full of fresh fish off his back as he was climbing the stairs to his chalet.

In France he narrowly missed being shot in the Café de la Paix in Paris when a bullet intended for another diner shattered his glass.

Alastair Horne was appointed CBE in 1992 and knighted in 2003. He was appointed Chevalier of the Légion d’Honneur in 1993 and was a Fellow of the Royal Society of Literature.

He was first married in 1953 to Renira, the daughter of Admiral Sir Geoffrey Hawkins, KBE, CB, MVO, DSC, with whom he had three daughters.

The marriage was dissolved and in 1987 he married Sheelin Eccles, an artist with whom he lived in Turville.