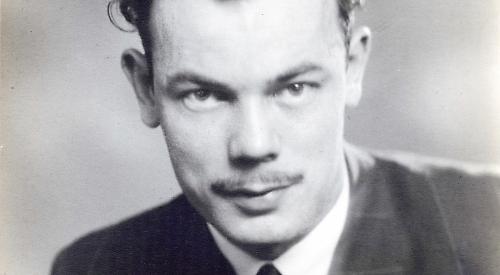 He was the third Henley-born generation of the Reeves family.

He was brought up by his parents, John and Marion, in Park Road in an era when the drays of Brakspear and timber carts of Messers timber merchants were still drawn by heavy horses.

Like so many of his generation, Peter left school at age 14 and gained employment with engineering firm Stuart Turner, joining his twin brother John and older brothers Fred and Harry.

He attended night school and gained valuable insights and qualifications in the dark arts of trigonometry and technical drawing, while during the day as an apprentice he learnt how to sweep the machine shop floor.

Peter soon discovered that he had a talent for engineering and progressed towards his ultimate goal to be a precision engineer.

He was restless and soon developed a lifelong trait for self-improvement and, being of independent spirit and forthright in speech, it became his general approach to life.

He held a number of jobs in the engineering sector in furtherance of his career. On one occasion his independence and straight talking caused him to leave a job within an hour of starting.

When informed that the window on the lavatory doors was to check that workers were not just reading the paper, Peter suggested that his talents were not required in such a restrictive management regime!

When the Second World War broke out Peter wanted to join up and fight for Great Britain — his father, affectionately known as “Pop”, was a veteran of both the Boer War and First World War.

But his trade was “protected employment” so he was destined to manufacture gun sights and munitions in underground tunnel factories on the Henley-Wargrave Road.

As soon as the war ended, Peter was called up to perform the most unlikely role of an RAF policeman.

One has to wonder whether the RAF had an insight into his skill sets and decided to turn a poacher into a gamekeeper. After the briefest of training, Peter was destined to serve in India during partition. His trip out by sea was yet another adventure and Peter was able to enhance his breakfast rations as a result of others not fancying their kippers in rough weather.

On arrival, Peter served with distinction and achieved the “great accolade” of being demoted from Sergeant to Lance Corporal after being linked to a questionable act of cattle rustling. So much for the poacher turned gamekeeper strategy!

Prior to going to India, Peter married Beryl Stratton, probably with one eye on the possible dangers of the Indian sub-continent, but more likely one eye on the enhanced married man’s allowance!

He had met Beryl while buying his pipe tobacco in Strattons, the family tobacconists in Hart Street, Henley.

The “nuclear” family settled into normal Fifties and Sixties family life, at first living on the Gainsborough estate and then owning their first house in Vicarage Road before moving to New Road in Shiplake.

Only once “the boys” had finished their secondary education did Peter feel able to fulfil his dream of setting up in his own business, namely Industrial Marking Presses. After much hard work and long hours at the factory in Basingstoke Road, Reading, success came and he managed to acquire his previous employer Metaform on the Fairview estate in Henley, where he consolidated and continued to grow the business.

More success followed with the acquisition of Weymouth Precision on the south coast and the establishment of agencies around the world selling his Henley designed and manufactured “hot foil” printing presses.

Peter retired at age 57 but — ever the frustrated farmer (having worked as a lad in his holidays at Cox Leas Farm in the Stonor Valley) — he purchased what was to become Pete’s Acre at Shiplake Cross on the Henley-Reading Road.

He transformed what was an overgrown orchard into a very productive smallholding. There he delighted in demonstrating to his sons and subsequently his grandchildren the joys of hard work, problem-solving and self-reliance while growing produce far in excess of the family’s requirements.

With his engineering background. there seemed nothing that Peter couldn’t turn his hand to.

This was evidenced by his lead on the renovation and rebuilding of his son Christopher’s first home in Lane End.

Such were his skill levels that passers-by used to ask for his card and request quotes for improvements to their own homes.

These requests were met with a twinkle in his eye, a touch of his forelock and confirmation that his order book was full and that he was unable to take on any new work in the foreseeable future.

Peter was the quintessential father of his age and he and Beryl formed a formidable team lasting 62 years.

He provided for the family and she brought up the children and kept the family finances in the black.

Peter developed macular degeneration in his sixties and became registered blind at an age when suitable surgery was in its infancy and therefore less than predictable.

Still he kept to his core belief of self-reliance. He remained so active and engaged that anyone casually observing him would have had no idea that he was blind.

With advancing years and his blindness, Peter never gave up on anything and with his wife’s ever-closer supervision, continued to be an indefatigable help around their new house in Harpsden Road, Henley.

After Beryl’s death nine years ago, Peter will perhaps be best remembered as the quirky old chap with the white stick living independently in Harpsden Road.

His forays into Robert Dyas, Hubbledays and other shops in Henley were truly exciting for him but perhaps less so for shop assistants who were jealous of their displays and didn’t want them to come crashing down!

He remained independent to the last, thanks to a loyal band of carers.

I would like to take this opportunity to thank them all but specifically Sarah Goring who, above all, exhibited tolerance of an unimaginable high order for which Peter’s family give their praise and thanks.

It is also true to say that the whole community of Henley contributed to Peter’s ability to live as independent a life as he did.

Nigel Rainbow at the Three Horseshoes, opposite Peter’s bungalow, always kept an eye out, especially during bad weather; the drivers of the local buses stopped almost anywhere to pick up Peter; two students at The Henley College rescued Peter from the middle of a roundabout when he became disorientated and lost his way; shop assistants guided Peter to find items in-store; and members of the general public invariably stopped to ask whether he needed assistance.

Henley should be proud that as a community they care about the older folk and assist whenever needed.

It was only in the last eight months that Peter realised that his safety was compromised and took the decision to move to the new Chilterns Court care centre.

The choice of care home proved quite ironic in that Peter’s room had a clear view (had he been able to see) of where he entered the world, that being the old Townlands Hospital.

Peter succeeded in his oft glibly stated ambition to be “a confounded nuisance for as long as possible” and at 95 years old even he will have considered that he had not had such a bad innings.

Peter represented “The Last Man Standing” of his generation in the Reeves and Stratton families.

We will miss him.