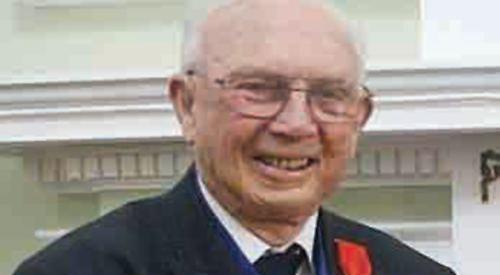 A D-DAY veteran who became an instructor for the Henley Sea Cadets has died, aged 92.

Dennis Campbell Morris was born in Henley but spent part of his childhood in Newark, Nottinghamshire, with his mother and sisters. He also had an older stepsister.

During the Second World War he served with the Royal Navy, joining the training ship HMS Collingwood in 1943, when he was 18.

By the autumn of that year he had joined the crew of HMS Winchester in Rosyth in Fife and took part in the Battle of the Atlantic.

Later, it was one of the ships that guarded the Normandy beaches while troops were landing there on D-Day.

In 2015 Dennis was awarded the Legion d’Honneur by the French government and it was presented to him by the mayor of Christchurch at a special lunch. He also served on HMS Abercrombie, sailing to North Africa and then the Indian Ocean before making the return journey to England the day after VJ Day.

Dennis was discharged from the Royal Navy in 1946 and two years later married Mary.

Dennis retired from the cadet force in 1957 due to his work commitments as a painter and decorator.

The couple moved to Bournemouth in 1966 where they helped their daughter Lorraine run a successful guest house until 1978 when it was sold.

Dennis then semi-retired from painting and decorating and became caretaker of the Marine Training Centre at Hengistbury Head.

He gave up work when he was in his Eighties to look after Mary until her death in 2011. Dennis joined the Christchurch and district branch of the Royal Naval Association in 1998 and was an active member.

He was chairman for five years until March this year and would arrange social and fund-raising events and visit sick shipmates.

In recognition of his long and active service with the association, Dennis was made a life president of the Christchurch and district branch.

He was also a long-term member of the Pokesdown and Southbourne
Ex-Servicemen’s Club and the Royal British Legion.

Dennis died on October 5 and his funeral was held at Bournemouth crematorium on October 30.

He is survived by his daughter Lorraine and partner Christine.