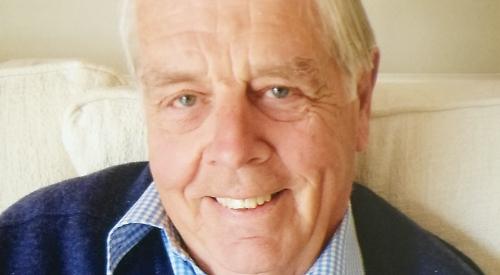 ROGER SAYER was born in Ossett, West Yorkshire, in 1942.

He was the eldest child of Clinton and Margaret and was followed by his brother, Malcolm, two years later.

Rowing was Roger’s sport of choice in his university days and he remained immensely proud of representing Pembroke College, keeping a picture of the eight on the wall of his study.

His auntie Joyce could never understand why he looked so exhausted at the end of a race when he’d been sitting down the whole way!

In 1972 Roger met Wendy and they were married on the Isle of Wight six months later. Their first daughter, Natalie, arrived in 1975.

The family were living in Marlow but moved to Wimbledon, halving Roger’s commute to his merchant bank in the City. Three years later, Kim was born.

The children fondly remember their father taking them to ice-skating lessons at Richmond ice rink on Sunday mornings and family walks with the family dog, Mollie, in Richmond Park, Wimbledon Common and Box Hill.

Roger and Wendy went their separate ways in 1990 after which he returned to live in Buckinghamshire, close to the river that he loved.

He worked tirelessly as an independent financial advisor, setting up his own company, RWS Associates. He was always meticulous with his paperwork and was incredibly organised in everything he undertook.

In 1997, Roger joined the former Aspect Park Golf Club in Remenham, where he made quite an impression on Lynn, the ladies’ captain.

He moved to Henley to be with her and they went on to marry in 2001.

Golf was a constant fixture in much of Roger’s life with much time spent on the course and in the 19th hole! He was a member of Henley Golf Club and would want a mention of his hole in one at New Malden golf course.

Another passion of Roger’s was his beloved Leicester Tigers and he was at his happiest on the terraces at Welford Road, chanting “Deeeeaaano” and “Tiiiiiigers” and bantering with the referee with a pint in hand.

At the age of 67, he dabbled in cycling and rode from Portsmouth to Paris in six days in aid of Help for Heroes.

He trained hard and was so proud, and relieved, to make it to the finish line, cycling up the Champs-Elysées with his fellow 240 cyclists. Together, they raised more than £1.4million.

Roger joined Henley-on-Thames Rotary Club in February 2009 and, as chairman of its foundation committee, helped the campaign to eradicate polio. He was an active fund-raiser for this and several other Rotary causes.

He was immensely proud of the success of the Rotary campaign, which has helped reduce the number of cases of polio by 99 per cent since 1988.

Roger, who was president of the club in 2013/2014, organised an annual jazz dinner and could often be seen shaking collection buckets in the King’s Road car park. Most recently, he had been an enthusiastic and dedicated member of Henley Bowls Club. During his captaincy, the club achieved its highest standing in its history.

Roger always spoke warmly about his and Lynn’s friendships through the club and it gave him great pleasure to be so actively involved in the club right up until late summer this year.

Some of the family’s fondest memories are of the holidays they shared with Roger, including when camping.

One night, in Ile D’Oléron, an island off the west coast of France, the heavens opened and Roger got up and dug a trench around the tent in the pouring rain, saving the family from floating away.

They frequently holidayed in the Lake District with friends or with Granny when Roger would tend the barbecue. They ventured to Portugal one year and to Mijas in Spain.

Roger always had an aversion to sun cream and in those days he simply layered several short-sleeved shirts with the collars turned up and an obligatory sun hat to protect his head.

And, of course, they all had to stay out of the afternoon sun from noon to 3pm as he was a stickler for timings. Ironically, on the night that Roger died, the clock in his hospital room stopped.

He chose to spend his last four “substantial” birthdays in Portugal and invited his daughters to join him and Lynn. They have wonderful memories of his 75th in May this year, relaxing on the beach and beside the pool, strolling along the promenade, and sharing fantastic meals in some of his favourite restaurants and cafés.

Roger did love his food. He was particularly partial to puddings — apple pie, sticky toffee pudding, Peach Melba, you name it.

He once told Lynn, after she had lovingly recreated his favourite melba with home-made coulis and freshly poached peaches, that it wasn’t as good as the version with tinned peaches, squirty cream and strawberry sauce. Never was it said that his tastes were refined! Indeed, Roger had a great sense of humour, which was often close to the bone, and he had a loud belly laugh and a warm heart.

He was unwavering in his support for the causes and people close to his heart, which was evident for everyone to see, and he would usually have quite a convincing argument to win you round to his way of thinking.

He was immensely proud of his girls and loved his grandchildren. He would wear his heart on his sleeve where any of them were concerned.

“Grandad” will be remembered by nine grandchildren for numerous trips to feed the ducks and to the play park, reading stories, joshing around, playing aeroplanes to encourage them to eat and swinging the kids high in the air with a “one, two, three, weeee....”

In his final few weeks, Roger was so impressed, as was his family, with the care he received by all the staff at Royal Berkshire Hospital. In his words, it was “second to none”.

The staff really couldn’t have done more to ensure he remained comfortable and for that the family will remain forever grateful.

His daughters would like to thank Lynn for caring for their father during his poor run of health over the past few years. She did everything possible to make him comfortable and cater for his whims, even bringing dressed crab into the Royal Berks when he’d had enough of hospital food!

Roger’s family remain incredibly touched by the kind words received since he passed away and have enjoyed reading the stories and memories of him recounted in the many letters and cards which have brought them great comfort.

It was standing room only at his funeral at Reading Crematorium on Wednesday last week, which was officiated by Rev Glyn Millington, minister of Christ Church in Henley.

A wake was held afterwards at the bowls club with a delicious buffet, including many puddings, prepared by lady members of the club.