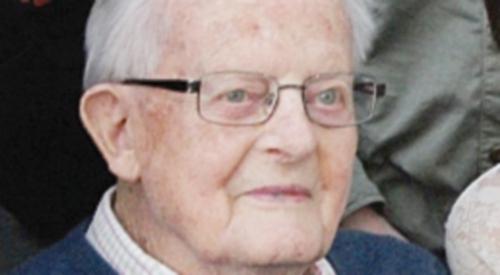 FRIENDS and family gathered together at St Thomas of Canterbury Church in Goring on January 25 to celebrate Tom Jones’s long life.

Tom was a familiar face around Goring, having chosen the village for his retirement home in 1966 following an enormously varied career in the RAF.

Born in February 1913 in Port Talbot, he was the eldest of four children.

Tom spent his formative years in Trellech, near Monmouth, where he developed his lifelong love of horses, then still an important means of transport in rural areas.

After school, he started training with a veterinary surgeon in Maidenhead before joining the RAF in 1933.

In his early career, he saw service in the Middle East, supporting the RAF Armoured Car Company. He returned to the UK when the Second World War broke out and joined the RAF Regiment dealing with airfield security.

He met Rita Dryden during a short spell in hospital at Littleport and they were married in Bournemouth in 1941.

In 1942, with air losses increasing, Tom was selected with several NCOs from the regiment for officer training.

He learned to fly the following year under the British Commonwealth Air Training Plan. This coincided with the birth of his first daughter, Elizabeth, whom he barely met until after the war.

By 1944 he had completed his pilot’s course in Canada and returned to the UK fully qualified to fly the twin engine Vickers Wellington (Wimpy) medium bomber.

At the cessation of hostilities, Tom was stood down from flying duties and posted to the RAF equipment branch where he joined the Occupational Forces at Iwakuni in Japan.

The Allies were creating essential infrastructure and helping to get the country back on its feet again.

During his tour, Tom visited Hiroshima and even visited Ground Zero with his family.

Upon his return to the UK, he joined HQ Fighter Command at Bentley Priory and, now a flight lieutenant, he was at last able to meet his second daughter Suzan. He went on to serve in various roles in the UK and was promoted to squadron leader in 1952.

Then, around the time of the Suez crisis, came a return to Iraq to deal with the logistics of closing down our Middle East bases.

Then it was back to England with NATO before a plum posting to Germany with Second Allied Tactical Air Force at the height of the Cold War. Working out his days at the Ministry of Defence, Tom retired from the RAF in 1968.

Then came a 10-year spell as an executive officer with the DHSS in Reading and then Oxford, where he specialised in supplying invalid cars. He retired again in 1978 before being asked to help set up the Motability Charity. Finally, a third retirement came in 1980.

Sadly, his wife Rita died after a short illness in 1985, after which Tom became something of a Goring stalwart. He continued to run the old family home and prided himself on keeping his independence, with a little help from friends and neighbours, right through until he had turned 99. Amazing!

He loved his gardening, his greenhouse and even chewing the fat with his buddies over a pint — he loved a good argument, be it over world politics, the state of the nation… whatever.

After all, he had such a varied life and had borne witness to incredible social and economic change, which provided a broad outlook on life.

Then, with his memory starting to become unreliable, Tom decided it was time to move to a care home in 2012.

Sadly, after picking up a chest infection over the festive season, Tom finally succumbed and died peacefully, in his own bed, on January 5. He was 104. Quite a journey!