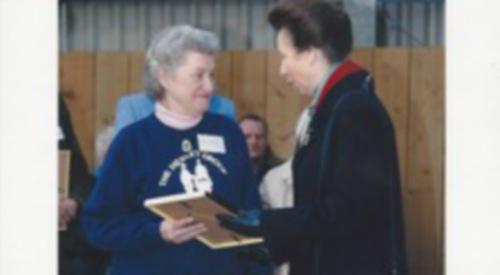 JANE BRAZIL was a founder member and, for many years, chairman of the Henley group of Riding for the Disabled, which was established in 1975 by the late Christine Pullein-Thompson.

Jane had ridden and worked with the “P-Ts” as a child and later with Henry Wynmalen, master of the Woodland Hunt.

She hunted with the Woodland, thriving in its pony club and becoming a member of its successful Prince Philip Cup mounted games team in the Fifties.

Sadly, a bad fall and the resulting back problems that plagued her for the rest of her life curtailed her riding career.

But through RDA she shared her great love and knowledge of horses with many others, especially children.

For many years, Henley RDA has held their sessions at Checkendon Equestrian Centre. In 2011, Jane was honoured to receive the Riding for the Disabled Association’s president’s award from the Princess Royal for her exceptional dedication to the association over many years and this year, a long service award in recognition of nearly 45 years with the group.

Jane was a familiar figure, both in the town and at the Henley Show, fund-raising for the Henley group.

Both her sons were founder members of the 1st Stoke Row scout group in the early Seventies and Jane became chairman of the group for many years and a member of the South Chiltern District Committee.

She received the Chief Scout’s Commendation in 1986 and the Medal of Merit with Bar in 1997.

Jane de Garis was born in Emmer Green in 1938, the daughter of Jack de Garis, then divisional veterinary officer for Berkshire.

She was educated at Highlands School in Peppard followed by Kendrick Grammar School for girls in Reading. She subsequently worked back at Highlands School, then the Royal Berkshire Hospital, and latterly at the Veterinary Investigation Centre at Coley Park.

In 1959 she was married to local famer, Bernard Brazil, and had lived on the family’s mixed farm at Newnham Hill, near Stoke Row, ever since.

Despite a long battle with cancer, Jane remained very active and involved with her family, friends and the village she loved until she died peacefully at the Sue Ryder Hospice in Nettlebed, on May 11.

Sadly, Bernard died in 2000 but Jane is survived by her two sons, five grandchildren and extended families. She is greatly missed.

Following a family cremation, her many friends from the RDA, scouts, Stoke Row Chapel and the farming and local communities, joined the family for a service o thanksgiving for Jane’s life at the chapel on Monday.