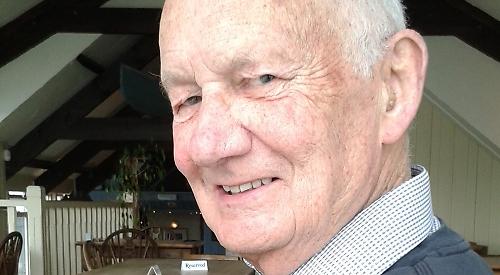 PHILIP BUCKETT, who was known for his sense of fun and good humour, has passed away peacefully, aged 80.

He was born to Walter and Alice Buckett at their little cottage in Fair Mile, Henley, on October 16, 1938. He was the youngest of five children, four boys and a girl.

He left school at age 15 and began an apprenticeship as a compositor at Higgs Group printers in Station Road, Henley, publishers of the Henley Standard.

He didn’t want to do his National Service but actually enjoyed his two years in the Royal Signals and aftewards was pleased that he had done it.

Philip returned to Henley to complete his apprenticeship at Higgs and played football for Trinity Hall, then Newtown and lastly the YMCA.

He described Higgs as a lovely, family-run company and a great place to be. He said it felt like being part of one big happy family and he completed 50 years there.

In 1960 a new member of staff joined and it wasn’t long before he was dating her. This, of course, was Jean, whom he later married.

Philip was taken to meet her family and her father Tom immediately took to him and promptly invited him to join the family for Christmas that year.

It was the start of a long friendship as he always loved Tom’s company and would tell people what a lovely, gentle man Jean’s father was.

Philip and Jean were married in 1963 and shared 56 years together. Their first son, Alan, was born in January 1966 followed by Ryan in November 1968.

Philip was immensely proud of his boys and was always happy to talk to people about their achievments. In fact, he was happy to get into conversation with anyone and everyone, mostly to have a good joke and a laugh. He was well known for his wicked sense of humour.

Philip was delighted when first grandson Jody was born in 2000. Then in 2005, just when he was thinking there would be no more grandchildren, Ryan and Natalie had Charlie and then a couple of years later Jools was born to Alan and Niina.

His family was complete and he took so much pleasure watching his grandchildren grow up and they enjoyed his sense of fun.

When Philip could no longer play football, he was encouraged by his eldest brother Arch to take up bowls. He played for many years for Stuarts Bowls Club until it closed in 2005 after which he and many of his friends joined Shiplake Bowls Club.

He was very happy there, making new friends, and he continued playing until ill-health stopped him. He was very frustrated about this but was delighted that Ryan had taken up the game and he could live his dream through him.

Jody played for a few years and Charlie is now playing with his father at Suttons. Philip was waiting to see whether Jools might carry on the family tradition.

He was so pleased when his boys got married and Niina and Natalie became part of the family. It took the women a while to get used to his sense of humour and teasing but once they did, they accepted that was how it would always be and probably looked forward to it during family get-togethers.

The family moved to Deanfield Road in 1982 but Philip struggled to settle down. But six months later Robert and Doreen Hamilton-Green moved in next door. That was a turning point as he and Robert had the same sense of humour and from then until the Hamilton-Greens moved to Wales in 2003 they got up to lots of mischief together.

While at Shiplake Bowls Club Philip became part of the gardening team along with Pat Maine, John Munelley and Sylvia Blackmore and looked forward to Tuesday mornings gardening with his friends.

One day in 2010, he met old friends Alfie Cook and Ken Piercey when they were setting off for a walk over the Mount, a place where Philip had spent many childhood years playing. He said he’d like to do the walk and rushed off to join them.  This led to the formation of the Wednesday Walkers group, which comprised about 12 friends and still continues weekly.

As Philip’s health deteriorated, he was unable to do the walking but continued to meet his friends for a coffee and chat when they arrived back in Henley.

Philip and Jean shared wonderful holidays with friends such as Peter and Val Annereau, Bob and Iris Southey, Bryan and Ann Clark, to name but a few, and this was something he really missed when he was no longer able to travel.

But he always said that he had so many happy memories of those times.

He loved the family Christmases spent with his wife’s sister Ruth and her family every year until both sides of the family had grown so much that they could no longer all fit comfortably into one house.

He also loved the get-togethers with his sister Connie’s family. Philip was always amazed at how well she seemed able to cope with catering for such large numbers and kept that side of the family together.

Philip was a real family man and liked nothing better than having all the family together, either for a meal at home or in a restaurant, and taking happy family holidays. There was so much laughter and fun.

He would always say to Jean on the way home after one of these events, “Wasn’t that a lovely time? I always enjoy being with my family. Aren’t we lucky?”

So much more could be said about Philip and the fun and laughter he brought to so many lives.

It was standing room only at Reading Crematorium in Caversham on Friday.

In attendance, in addition to a large number of family members, were former work colleagues and many of Philip’s bowling and walking friends as well as other friends.

A large number of mourners had to stand outside the chapel as there was no more room to sit.

Josie Williams, celebrant, conducted the service and read the eulogy.

It was family flowers only but donations to the British Heart Foundation were invited.