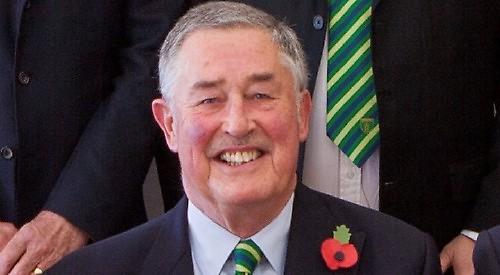 PAUL Learoyd Bradbury, who was also known as “Bradders”, died peacefully, at the Royal Berkshire Hospital in Reading on July 21 surrounded by his family. He was 79.

He moved to Valley Road, Henley, in 1979 with his wife Gay and children Nick, Richard and Rachael.

Paul’s love of education and sport started at an early age and earned him a place at Stockport Grammar School where he became captain of sport.

He went on to study law at Southampton University and represented England Universities at cricket in a number of first-class fixtures.

He took up his first lecturing role in September 1964 at Regent Street Polytechnic, a job which allowed him to be involved with both people and education.

Paul and his London flatmates would frequent the local hostelries in west Kensington where he met Gay, who had just arrived from New Zealand.

This led to a lifelong connection with New Zealand, including a year working as a lecturer at Victoria University. Paul and Gay moved to Nottingham in 1973, where Paul took up a principal lecturer of law post at Nottingham Polytechnic before being appointed as one of Her Majesty’s inspectors for schools (further and higher education) in 1978. He was appointed staff inspector for further and higher business education and led that team until 1993 when the service was disbanded.

He was a well-respected, popular and effective inspector and working with him was always interesting and rewarding (usually involving a visit to a local pub or hotel bar prior to dinner).

He was also instrumental in organising an annual cricket match between HMI England and HMI Wales, held in either Henley or Abergavenny.

After HMI he was made responsible for standards and training at the Law Society. On retirement he became an educational consultant until his total retirement in 2017.

Paul and Gay were married in September 1966 in Epsom, Surrey. Paul was a family man who always had time to spend with his children and seven grandchildren, providing advice and guidance whenever it was needed or enjoying watching them play sport.

Wherever Paul moved, his first stop was the local cricket, rugby and squash clubs to meet new people. The joining of sports clubs resulted in great, lifelong friendships in Sussex, Nottingham and Henley.

Over his 40 years in Henley, Paul contributed hugely to both the rugby and cricket clubs. He played for Henley Cricket Club’s 1st and 2nd XIs for 10 years.

He enjoyed watching his sons go on to play for Henley for a number of years.

Paul also ran the junior section of the cricket club from 1981 to 1985 and was instrumental in the formative years of many local players.

He was chairman of the club from 2006 to 2012 and oversaw the team that won the Home Counties Premier League twice as well as the completion of the ground purchase from Brakspear.

Paul was well known throughout Henley, both in his sporting and wider social circles. He continued to enjoy his family and friends and support the cricket and rugby clubs even as his health was failing him.

He will be remembered as a loving husband, father, grandfather and friend who enjoyed life and gave back to the local community as much as he took.

A celebration of life service will take place at Holy Trinity Church, Henley, on Thursday at 1.30pm followed by a cricket tea and drinks at Henley Cricket Club from 2.45pm.