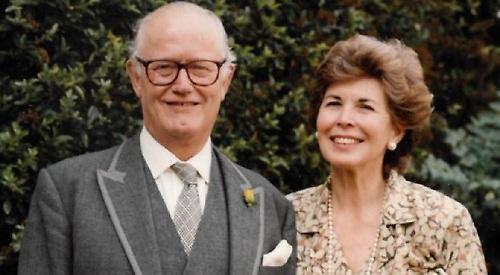 DAVID PALMER passed away peacefully at his home, Burrow Farm in Hambleden, on September 4, aged 92.

During his life and career, first in the British Army and then as an insurance broker, he was never one to shy away from a challenge.

This mindset was encouraged by his mother Lena who, just two weeks after the outbreak of the Second World War, when he was 13, took him from London to Stowe to sit three days of exams in the hope that he would obtain a scholarship.

David met this, his first major challenge, full on and he won the top scholarship, making him and his family justly proud. This was also financially significant inasmuch as David’s father Bill (Brigadier J W Palmer) was not well-off. Army pay in those days being negligible.

Sadly, David’s mother died a year later at the age of 37 but her determination was instilled within him. David, now 14, was spurred on to succeed, no matter the odds against him.

While at Stowe, the war still being waged, he was witness to a demonstration by a troop of armoured cars from the Household Cavalry. He was enthralled and, further to a later interview, he was accepted by the Life Guards as a potential officer.

Following training, he became a subaltern in that regiment and was promoted to captain by the age of 22. During this time he saw service in Palestine, Egypt and Germany.

David went on to become adjutant at the Mons Officer Cadet School, which was responsible for those who hoped for commission in either the artillery or cavalry.

After a period of time he found himself not suitably challenged by his role since, as adjutant, he had little to do with training, except on the Drill Square.

He decided to retire from the army but there is little doubt that his military experiences shaped his future life. David met Millie O’Neal in the summer of 1949, when they were aged 22 and 19 respectively.

She was the eldest of four children and had grown up in Alabama. She had moved to England three years previously.

They were engaged within a matter of months and married 363 days later in June 1950, just after her 20th birthday.

Fortuitously at this time, David was offered a job by Lumley’s, a Lloyds broker, which earned him a very respectable £5 a week. This was when he promised himself to earn more than a field marshall by the time he was 30.

From April 1950, David spent 40 years as an insurance broker, including six years in America where he moved with Millie. During those years the business there tripled.

He then moved to Willis Faber, another insurance broker, taking over its American operation. In December 1959, the family, which now included the couple’s daughters Melanie, born in 1951, and Alice (1959), moved back to England. Their third daughter Katie was born in 1962.

David’s career remained with Willis Faber for a further 30 years and he became a partner in 1969 and chairman from 1982 until 1988 when he retired at the age of 62.

He went on to become chairman of the British Insurance Brokers Association from 1988 to 1991.

He was also a founding member of the Worshipful Company of Insurers and a member of the Chartered Insurance Institute for 50 years.

He was always a keen supporter of various charities. He was commissioner of the Royal Hospital and also supported St George’s Hospital in Windsor.

David and Millie moved to Burrow Farm in 1979 and took an active interest in the Hambleden Valley and Buckinghamshire as a whole.

He served as High Sheriff of the county in 1993 and, in recognising the special place where he had been educated, he held his gala party in Stowe. He was later appointed deputy lieutenant of the county.

He was also president of the Hambleden branch of the Royal British Legion and took an active part in all village events.

David served as president of the Henley Show in 2006 and was a long-time sponsor. Throughout his life, David was known to love a good gathering and enjoyed planning parties, whether it was for Bonfire Night, election night, a birthday, his daughters’ weddings, an anniversary, Christmas or simply a tennis tournament.

David and Millie’s hospitality at their home was never stinted.

The family found a file he had made for the couple’s golden wedding anniversary, which was 2in thick and had 12 sections and numerous sub-sub-sections.

He also planned memorable family holidays for his children and grandchildren and friends.

Despite an often “formal” bearing, David was extremely sentimental. Beside that fighting spirit, another legacy of his mother’s was an abiding love of poetry, which was evident throughout his life.

In the decades following his retirement, he thrived on his literary compositions known to many. There were poems and odes to friends and family as well as booklets and memoirs.

David was also an avid collector and despatcher of greetings cards and always aimed to keep up to date, not only with all his children’s and grandchildren’s birthdays but also Valentine’s Day and Easter cards.

On the sporting front, riding was a huge pleasure for him and he loved hunting. The opportunity to run a shoot at Burrow Farm thrilled him to bits.

He was very proud of this and particularly of the team who helped him manage it.

David is survived by his three children and 11 grandchildren.

A service of thanksgiving was held for David’s life at St Mary the Virgin Church, Hambleden, on October 3.

Donations were made to the Hambleden Parochial Church Council and the Buckingham Foundation.