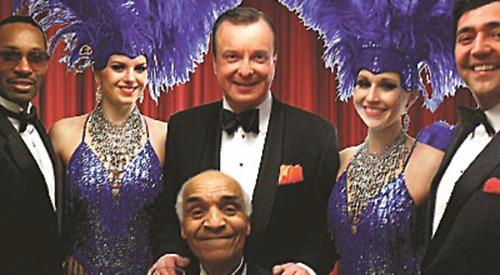 ACTOR and singer Kenny Lynch, who has died at the age of 81, was one of Britain’s first black entertainers and once serenaded the Queen.

He was a superstar in Britain in the early Sixties when he toured with the Beatles and had a top 10 hit with Up on the Roof (1962), which was a cover of a Drifters song.

Lynch, who lived in Nettlebed, was known for his versatility, building his career by performing in variety shows.

He was comfortable performing everything from stand-up comedy to singing the great American songbook in his Frank Sinatra tribute act.

He was also a talented songwriter and wrote songs for other singers including Linda Thorson and Cilla Black, while he also worked with the Beatles on Misery.

In 1966 he and American Mort Shuman penned the Small Faces’ hit Sha-La-La-La-Lee and although the band hated it, it was a success and reached number three in the chart.

After his hit with Up on the Roof, Lynch had another top 10 song with You Can Never Stop Me Loving You in 1963.

In 2006, he serenaded the Queen and the Duke of Edinburgh at a surprise 80th birthday party for Her Majesty at a restaurant in Mayfair. Accompanied by the pianist Laurie Holloway, Lynch sang several wartime songs, including People Will Say We’re in Love and The Way You Look Tonight, which drew a “thumbs up” from Prince Philip.

Lynch was born in Stepney, East London, on March 18, 1938, one of 13 children of a Caribbean seaman and an English mother of mixed race from Canning Town. When the Second World War broke out, the family was evacuated to Carmarthen.

On returning to London, they settled in Salmons Lane, near Commercial Road, Limehouse.

Lynch left school at 15 and, after having various jobs, he completed National Service in the Royal Army Service Corps. He was the regimental featherweight boxing champion. Alongside his singing career, Lynch appeared regularly in TV dramas.

This started in 1964 when he played Lucky, a West Indian singer-guitarist, in A Question of Hell.

He also starred as a Cockney workman in Johnny Speight’s comedy series Curry and Chips.

In 1972, he and actor Harry Fowler co-hosted children’s show Get This!, which was both informative and funny.

In 2012, he played the racist Kenny, a black man who disliked Indians, in Citizen Khan, which was billed as the BBC’s first south Asian comedy.

He also appeared on a range of other TV programmes, including Celebrity Squares, Mooncat & Co., Room at the Bottom, Bullseye,
Z-Cars, The Sweeney, Till Death Us Do Part and Treasure Hunt.

As a songwriter, Lynch often collaborated with others but he regularly sang and recorded a lot of his own material.

In 1996, he and his golfing friends Bruce Forsyth and Jimmy Tarbuck recorded a version of Winter Wonderland under the name the Three Fivers.

They said it was a “cheeky tribute” to opera singers Luciano Pavarotti, Placido Domingo and Jose Carreras, who were known as the Three Tenors.

Lynch was a showbusiness favourite of the Labour prime minister Harold Wilson, who appointed him an OBE in 1970 for his entertainment career.

In the Eighties he was sacked from his Sunday morning programme on BBC Radio Oxford for urging his listeners at home in bed to “really enjoy yourselves”.

Lynch remained a raconteur, TV personality and occasional actor and performed at the Kenton Theatre in Henley with the Rat Pack is Back, Britain’s longest-running tribute to the original trio of Frank Sinatra, Dean Martin and Sammy Davis Jnr.

Last year, he had a concert tour with Tarbuck and Anita Harris and appeared in ITV’s Last Laugh in Vegas.

His elder sister Gladys became the cabaret singer Maxine Daniels. She died in 2003.

He is survived by his daughters, Amy and Bobby.