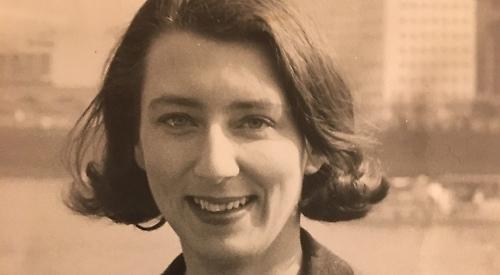 She had been a familiar and popular figure in the Henley community for more than 50 years.

She and her Polish husband, Zbigniew “Zbyszek” Mieczkowski, had bought Rose Cottage in Henley Park shortly after their marriage in 1965.

By happy coincidence it was close to Fawley Court where at that time the Polish Congregation of Marian Fathers ran the Divine Mercy College.

They became regular worshippers at its chapel and when in 1973 the house was severely damaged by fire Caroline became active in raising funds for its repair.

With her sunny and caring disposition and steely determination, she became an excellent fundraiser.

Since her half-sister by her father’s second marriage had been born with Down’s Syndrome, she had developed a deep interest in the care of the mentally handicapped.

Anne and Gerry Hall, who were friends and neighbours in Henley Park, were worried about what future there would be in adulthood for their daughter Jane who had Down’s Syndrome. Caroline turned to the Home Farm Trust, a long-established charity supporting adults with learning difficulties of which her father Lord Grenfell had been a patron.

When the trust agreed with her suggestion that Oxfordshire needed such a facility, she formed and chaired a group of Henley friends to raise the funds to purchase a property in which to house it. They solicited private donations, organised street collections in Henley, all-day bridge drives, Scottish reel dancing parties, sponsored walks and fundraising Christmas carol services at Dorchester Abbey.

Their untiring efforts were rewarded when, by the mid-Eighties, they had the funds to purchase a property at Abingdon which opened with Jane Hall as its first resident.

She was the elder child of the 2nd Baron Grenfell of Kilvey, son of Field Marshal Lord Grenfell, by his Canadian-born first wife, Betty Shaughnessy, who came from a distinguished Montreal family of Irish heritage.

In 1953, after nine years of private school education, she set off with a girlfriend to visit her Canadian and American relatives, financing themselves with temporary jobs in Montreal and New York.

Having a letter of introduction to Eleanor Roosevelt, widow of the late president, Caroline invited her to join herself and her friend for tea in their cramped Manhattan apartment. To her surprise, the great lady came and even helped with the washing up.

Back in London, Caroline embarked on a series of jobs until in 1964 she met her future husband.

By coincidence, while she and her brother had been temporarily living with cousins in Scotland to avoid the Nazi blitz on London, 18-year-old Officer Cadet Mieczkowski, having escaped from Poland when the Nazis occupied his homeland, was also in Scotland, training with the Polish 1st Armoured Division with which he would later land in Normandy as a tank troop commander.

A much decorated war veteran, he was, by the time Caroline met him, a leading light in the Polish community in Britain, where he had settled after the war.

After marrying in 1965, the couple made Rose Cottage their home and Caroline had their son Stefan and daughter Helena.

Through most of her adult life she had been the point of reference for the far-flung Grenfell family, keeping everyone connected.

She is survived by her husband, their children and two grandchildren.