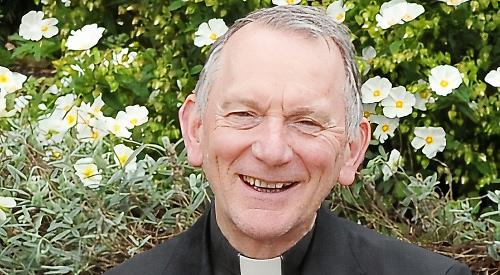 THE parish priest for Goring and Woodcote has died at the age of 72.

Father Antony Francis Maximilian Conlon, who was in charge of the Catholic churches of Our Lady and St John in Goring and Christ the King in Woodcote, had been suffering with cancer for some time and was cared for in his final days at the Sue Ryder Duchess of Kent hospice in Reading.

Fr Antony, of Ferry Lane, Goring, was chaplain at the Oratory School in Woodcote from 2001 until 2014 and the school has offered a requiem mass in his honour.

He was also responsible for the Oratory Preparatory School in Goring Heath, which at the time was linked to the independent Catholic senior school.

Fr Antony grew up in Dublin and as a young man moved first to Liverpool then London, where he became a server at Westminster Cathedral.

He also held a licence in church history from the Pontifical Gregorian University in Rome and would later undertake a PhD at the University of London’s Heythrop College.

Fr Antony was ordained by Cardinal Basil Hume on May 26, 1979, the feast of St Philip Neri, and served a number of London parishes before joining the Oratory Schools Association in September 2001.

His inaugural mass was a requiem as his arrival coincided with that month’s terrorist attack on the World Trade Center in New York.

Highlights of his tenure included the school’s 150th anniversary mass in 2009 and the beatification in 2010 of its founder John Henry Newman, a Catholic writer and theologian who was made a saint last year.

He oversaw many improvements including the restoration of the school’s old chapel as St Joseph’s Chapel, the rebuilding of the outdoor shrine altar and the building of a new high altar in the larger chapel. Fr Antony also organised annual events including pilgrimages to Lourdes and Rome and, early in his career, coached the men’s football XI known as Father’s Angels.

After stepping down from the position, he was offered the role of parish priest as he expressed a desire to remain in the community where he had built strong connections.

Throughout his adult life Fr Antony also maintained a connection with the Sovereign Military Order of Malta, which he joined in 1971 before becoming a chaplain in 1980.

He was appointed Chaplain of the Grand Priory of England at its restoration in 1993, a position he held until his death, and appointed Grand Cross in 2015.

He organised chaplaincy for the Order’s Lourdes pilgrimages and was also regularly involved in leading devotions for the Order.

Fr Antony was also an advocate for the extraordinary mass, a traditional Latin version of the service, and was in high demand from the Latin Mass Society and others as one of the few people who were capable of celebrating this form.

Fr David Elliott, head of theology at the Oratory, said: “He threw himself into school life with great gusto and supported every aspect, whether on the rugby touchline, at music concerts and events or plays.

“He was an ever-present, assuring presence for pupils, parents, governors and staff. Above all, it was the daily round of masses, prayers, teaching and counselling for which he will be especially remembered by a generation of young people.

“In a role which made so many demands on his time, from early morning to late night, it is astonishing that he also found time to write his doctoral thesis.

“The number of requests for baptism and reception into the full communion of the Catholic Church during his time was a true reflection of the kind of ministry St Philip Neri envisaged — not so the hard sell, but more by a subtle approach of making the Catholic faith attractive.

“Fr Antony will be especially remembered for his great industry, unflagging work ethic, devotion to word and sacrament and his zest for life.

“He was like a freshly-opened bottle of champagne, full of life and vitality, bubbling over with love and appreciation for others and sacrificial in his desire to serve those among whom he lived.”

A funeral for close family was held on Tuesday with further celebrations planned once the coronavirus lockdown ends.

Donations may be made in his memory, via Howard Chadwick Funeral Services in Wallingford, towards the building of the new parish room at Goring or the Duchess of Kent hospice.