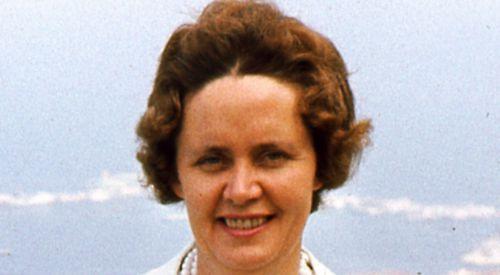 MURIEL Louise Farmborough was born on October 8, 1929, the much-loved only child of Alfred and Jessie.

Home was Dollis Hill Avenue, Cricklewood, and Muriel stayed on to live there with her mother after her father’s death in 1961.

Muriel attended the Henrietta Barnett School where she formed friendships that would last a lifetime.

She went on to study law at King’s College, London, and was presented to Queen Elizabeth, the Queen Mother, at her graduation ceremony in Westminster Abbey in May 1957.

Muriel actively engaged with both her school and university alumni, enjoying reunion events and meet-ups.

There followed a long and successful career in which Muriel focused on probate law. She was initially based at the principal probate registry at Somerset House, moving up to the position of principal clerk.

In 1965, she took up a new appointment at the Oxford district probate registry, where she remained in a senior role until her retirement in October 1989. She enjoyed being part of the Civil Service Club, attending reunion events for many years afterwards.

Family was important to Muriel. She spent time with her aunt Lillian, known to her as “Auntie Fair”, and her cousins Jacqueline, Derek, Rita and Graham. Muriel was part of every special celebration and often shared Christmas and holidays with her cousins and their families.

Travel was an enduring love. During the Fifties and Sixties Muriel was an active member of the Holiday Fellowship, where she formed friendships and “had adventures”, often in the company of her old school friends, Sybil, Shirley, Eva, Valerie and Joyce.

In 1969, Muriel and her mother moved to Goring. The new-build house in Lycroft Avenue was home for almost 50 years and Muriel cared for her mother there until her death in 1984. Muriel embraced life in Goring, becoming involved in many local clubs and societies. She particularly enjoyed outings and competitions with the Goring & Streatley Photographic Society (now the Goring Gap Photo Club) and acted as treasurer for a while.

Once retired, Muriel found time to travel again. Gibraltar, New Zealand, Canada, Austria, Denmark, Switzerland, Italy and the Netherlands all featured in her photograph albums — often in the company of a friend, or with Megan, the wife of her cousin Derek.

Muriel moved to the Grange care home in Goring in 2017 and celebrated her 90th birthday there in October 2019, together with family, friends and staff.

Muriel touched many lives. She was well-loved and she will be missed.