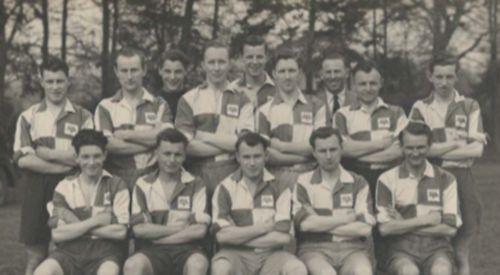 RONALD ALBERT HUGHEY was born on January 22, 1931 in Henley and was widely and fondly known as “Rocket”.

He worked for NHS Oxfordshire for more than 40 years, based mainly at Townlands Hospital.

He was an electrician by trade and had two children, Sally and Carl, from his first marriage.

He was married to his second wife Joan for just over 40 years and they lived together in the same house in York Road until she passed away in October 2019.

Ron’s number one passion in life was sport. He participated in many different sports during his lifetime.

He rowed for Henley Rowing Club, played football for the YMCA and lawn bowls at Stuarts Bowls Club in Henley.

He later took up football refereeing and refereed different divisions up to FA Cup first rounds.

As he was ambidextrous, he was also one to look out for at tennis and table tennis.

Ron also loved dancing and competed in ballroom dancing, which is where he picked up the nickname “Twinkletoes” as he was so light on his feet. He danced at many places, including Victoria Hall in London, and won many titles.

To be a good dancer you need to have musicality, which Ron did as he also played the trumpet with the Henley Town Band.

Ron was a dedicated supporter and member of Reading Football Club and used to go to every home game while he was still able to. On the way back from the games he would usually make a stop with his football companion and dear friend Patrick at the Three Horseshoes pub in Reading Road for “a glass of milk” before going home.

Ten years ago, on his 80th birthday, he celebrated with his family and close friends at the Madejski Stadium by watching Reading play Hull City. He was a match ball sponsor and met Sir John Madejski. It was a great and memorable day, even though the game ended 1-1.

Ron was quite a character who would help his neighbours with anything from changing a lightbulb to any general advice and for that they would jokingly call him “The King of York Road”.

After Joan’s death, he joined the Over-60s Club and he always looked forward to his three visits per week to meet up with other people as the very sociable, friendly and easy- going man he was.

He truly missed these visits when unfortunately the club had to close due to the coronavirus pandemic.

Ron sadly passed away only six days after his 90th birthday at the Royal Berkshire Hospital in Reading.

He will always be remembered for his laugh, smiley face and thumbs-up. He will be truly missed by his family and friends.

Ron’s family would like to thank everyone for their support and kind wishes. Donations in memory of Ron will be given to the Thames Valley Air Ambulance.

To make a donation, visit https://ronaldhughey.muchloved.com