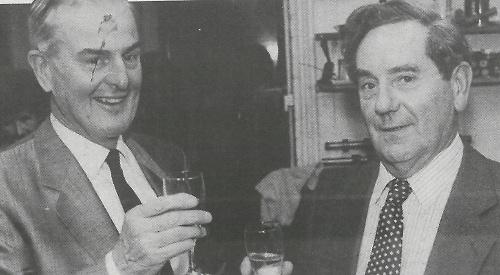 A FORMER managing director of the company which publishes the Henley Standard has died.

John Bridgman was appointed to the role at Higgs Group, of Station Road, Henley, in October 1987 and retired just over eight years later at the age of 66.

His was a new position as his duties were previously the responsibility of John Luker, who was then company chairman and whose family has owned the business since 1900.

While Mr Bridgman was in post, Higgs Group was the first company in Britain to be recognised for its high standards by the newly-formed Printing Industries Quality Group.

Henley MP Michael Heseltine, then also deputy prime minister, presented him with the organisation’s quality verification certificate a few months before his retirement.

After stepping down, Mr Bridgman spent much of his time walking in the Chilterns and also took up silversmithing, which his wife Jean had enjoyed for many years.

The couple, who lived in Henley, Middle Assendon and Witheridge Hill for a total of about 40 years, moved to Dorchester around 2000.

Mr Bridgman enjoyed good health until he passed away at The Close care home in Burcot, where he had been living for about three months, on Friday. He was 91.

Mr Bridgman was born in the Wirral in 1929, the third of six children to his parents, Ronald and Elsa, and had always enjoyed the outdoors so initially went into farming after finishing his National Service at the age of 20.

Soon afterwards he took on a sales job with tractor firm John Allen, of Oxford, and moved to the area where he met Jean (née Hobley) at a mutual friend’s party.

The couple were married at Caxton Hall in London in 1958 and continued living apart for a short while afterwards, with Mrs Bridgman returning periodically to her family in Leicestershire.

They decided to settle in Henley after falling in love with the town on a visit and first rented a flat in St Mark’s Road, where they became lifelong friends with Mr Luker and his wife Anne, who lived two doors down.

The Bridgmans bought a house off Greys Road around 1960 and Mr Bridgman took another sales job with Mercedes-Benz, which he held for more than a decade before moving to electronics firm Marconi.

During this period, he travelled the world and his wife, who had a number of temporary clerical roles, would fly out to visit him whenever she could.

Mr Luker later recruited him because his expertise would help modernise the printing firm and Mr Bridgman accepted as he wanted to settle and travel less. On his departure, Mr Luker praised him for his leadership skills and for steering the company through the recession of the early Nineties.

The Bridgmans remained members of Phyllis Court Club in Henley.

For a time, Mr Bridgman volunteered for an organisation which helped young people to apply for jobs.

Mrs Bridgman said: “John enjoyed travelling but it became exceedingly tiring after a while and he was very keen to be based in Henley, so the position at Higgs worked out perfectly for him.

“We always had a very good social life and enjoyed Henley enormously, which is why we always stayed in the area.

“John loved walking and always remained a country boy at heart. Wherever we went, if there was a farm, that’s where John would be.

“He enjoyed volunteering as he had been around for a long time and had some good advice to pass on to younger people, some of whom hadn't a clue about the working world.

“John was pretty outspoken, extremely honest and would always do a kind deed for anyone regardless of their social standing.

“He worked exceedingly hard and always put his work before pleasure.

“We enjoyed an exceptionally happy marriage with a lot of time spent travelling together. Our time was filled with fun and good friends, for which we were both very lucky.”

Mr Luker, who is now life president of Higgs Group, said: “The family directors were especially grateful to John for taking on the post, the first time the company had had a chief executive from outside the family in its long history.

“He successfully developed the cultural outlook of the firm from a largely paternalistic perspective to a more corporate regime, while still retaining a deep commitment to the happiness and wellbeing of all the staff.

“His loyalty and dedication to the company throughout this time amply laid the foundation for his successors.”

Steve Luker and Julie Smith, who jointly chair Higgs Group, said: “John made a significant contribution to Higgs & Co during his tenure as managing director.

“He was hard working, loyal, charming and generous. He will be missed for all these qualities but most of all for his big-hearted sense of humour and infectious laugh.

“He and his wife Jean have remained great friends to our family and we will miss him dearly.”

Mr Bridgman leaves his widow and only surviving sister, Jacqueline, who lives in America.

A private funeral will be held at Dorchester Abbey on March 24.