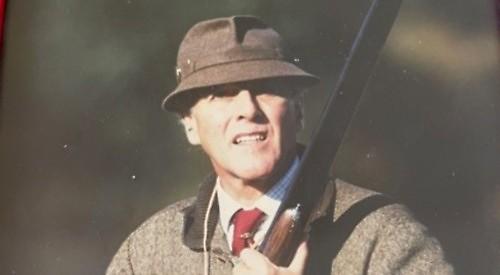 A FARMER who launched a crime reporting network for South Oxfordshire has died, aged 88.

Michael Colston, who lived at Ewelme Park Farm, near Nettlebed, launched Dogwatch in 2007 following a spate of dog thefts from farms across the district.

The organisation, which has thousands of members across the Thames Valley, monitors all crime affecting farmers and landowners.

He was born in London on July 24, 1932. His father, Sir Charles Colston, was an engineer who revolutionised the fortunes of the American Hoover company.

He built a factory in London and became company chairman in 1937.

He then founded Charles Colston Ltd, a pioneering dishwasher manufacturer, and was later knighted for his services to industry and the war effort.

Michael was evacuated to Canada during the Second World War and billeted with a distant uncle and aunt in Toronto.

His uncle, who had served in the First World War, suffered from shellshock and used to wake him and his two cousins at 3am, equip them with broomsticks and drill them up and down the corridor.

After attending Ridley College in Ontario in 1945, he returned to England and went to Stowe.

He was commissioned into the 17/21 Lancers, based at Munster in Germany, for his National Service and then seconded to the 1st Royal Tank Regiment in Korea.

As hostilities approached a stalemate, the men attempted to brighten up their day by emptying a tin of soup and fitting it with a modified fuse. This was sent to Bomb Recognition with the message: “This forms part of a missile which landed near us. Is it dangerous?” The Americans took enormous precautions dismantling it only to discover the “H J Heinz” inscribed inside.

On one occasion, the men were entertaining some Americans to breakfast and cooking the eggs in a tank’s electric frying pan when the tank received a direct hit from a high explosive shell.

Little damage was done to the tank but the interior was plastered with eggs. The “cook” was unhurt and, poking his head out of the turret, said with a wry grin: “I’m afraid it’s going to have to be scrambled eggs this morning.”

Michael maintained that these companies were being subsidised by the Italian government in defiance of EU rules.

When a meeting with the then prime minister James Callaghan proved fruitless, he sold the manufacturing company but remained chairman of Colston Consultants and transferred his main energies to farming, forestry and the management of Ewelme Park.

In 1960 he had purchased the 800-acre estate along with its Lutyens-style house built on the site of one of Henry VIII’s hunting lodges.

In addition to founding Dogwatch, he personally supervised visits to Ewelme Park with some 1,500 schoolchildren learning about farming life. He was also a keen sportsman from boyhood and was a regular at some of the country’s best-known shoots.

He also rented a fishing beat on the River Dee and was a member of a syndicate that fished on the River Loddon.

Michael’s greatest passion was wildlife conservation, whether as adviser to the Hawk & Owl Trust or as a photographer.

In the course of 17 worldwide safaris, he chronicled his close encounters with polar bears in Svalbard, Norway, gorillas in Rwanda and orangutans in Borneo.

He married Jane Kilham-Roberts in 1956 but the marriage was later dissolved. In 1977 he married Judith (Judy) Briggs, who shared many of his safari adventures. She passed away in 2016.

Michael passed away on April 6 and is survived by the three daughters from his first marriage.