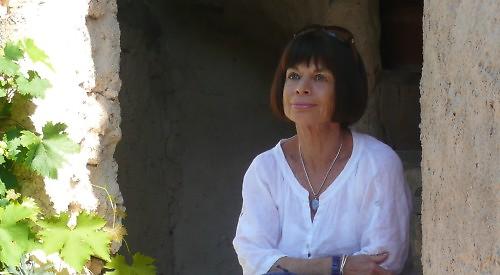 ROSAMUND “ROS” STARMER-SMITH’S life was crammed with love, fun, generosity, kindness, caring and no little sadness and tragedy. Her 73 years were filled to the brim from an unlikely start in Aldershot as the daughter of Warrant Officer Wally Bartlett and his wife Monica.

She loved her exciting and colourful childhood from riot-torn Tripoli where father served to Sixties Paris. Her indomitable mother Monica Bartlett had to look after her four children alone while her husband Wally was sent to Egypt.

Indeed, the influence of Monica can be seen throughout Ros’s life. Independent and determined women. One of four children, Ros had two brothers Trevor and Anthony and an older sister Peta, all of whom survive her.

Army life was nomadic and they spent time living just outside Paris where she attended a French school. After returning to England Ros went to secondary school in Hampshire excelling at sport and becoming head girl.

When she left she trained as a nurse at Great Ormond Street Hospital and did practical work in West London. She even worked for a time looking after the child who grew up to be actress Emma Samms.

A sign of her popularity and her loyalty meant that she was still in regular touch with nurses she trained and worked with.

It was a life the attractive and vivacious Ros lived to the full
spending much time in her sister Peta’s London flat. “She had a wonderful time both working and socially,” recalls Peta.

One of her patients was Rosalind Starmer-Smith, the younger sister of Nigel, a dashing rugby player whose talent earned him an Oxford blue and seven England caps. They met, went out and married.

Nigel became the voice of rugby for the BBC and Ros travelled the world with him and their three children Charlotte, Charles and Julian. They went to Olympic and Commonwealth games, Lions tours and rugby World Cups. It was a life she loved, accumulating friends for life wherever she went.

They settled in Oxfordshire, firstly at Kidmore End, then Peppard followed by Gallowstree Common. It was a frantic life with Nigel’s journalistic and broadcasting career and their three children excelling academically and in their sports.

Ros was a big rugby fan and together they ran the extremely successful Rugby World magazine for many years from a shed in their garden in Gallowstree Common.

But in 1991 at the age of 16 Charlotte became ill with a rare blood disorder and died. It was a devastating loss and 10 years later the family had to face more sadness when Julian, aged 19, died from non-Hodgkin’s T-Cell lymphoma just six weeks after becoming ill.

Ros and Nigel were living in Dunsden when Julian died, they had moved there from Ipsden and finally settled in Skirmett.

In the Eighties they bought a rambling centuries-old house, Peyroste, hidden away in the Var, it was the complete family home and was filled with family and friends all summer long. Ros never stopped; always cooking, pouring drinks, tidying and rarely relaxing.

After Charlotte and Julian died they continued to entertain dozens of friends over the years caring for the wonderful garden from early in the morning until sunset. When Nigel was diagnosed with dementia they found solace at Peyroste with its spectacular views, sprawling garden and memories.

Now Nigel is in a home in Oxford, it was another huge emotional blow for Ros to deal with but her thoughts were only for Nigel and friends and family.

She visited Nigel as often as she could before the coronavirus lockdowns began.

In recent years her greatest consolation came from her three grandchildren Jack, Poppy and Harry. After so much heartbreak she witnessed a new family growing.

She adored her daughter-in-law Katie and she and Charles moved to Oxfordshire from London to be close to her and Nigel.

It would be wrong to dwell on the tragedy that she had been through and as one friend said last week: “We will never really know just how much it affected her. She never let it define her.”

But the reaction of so many people with so many positive memories of this remarkable woman leaves no doubt that she left the world a much better place.

She died peacefully on July 6 in the Thames Hospice after a short illness with Charles and Katie with her. To the end she remained caring, generous, kind and loving.