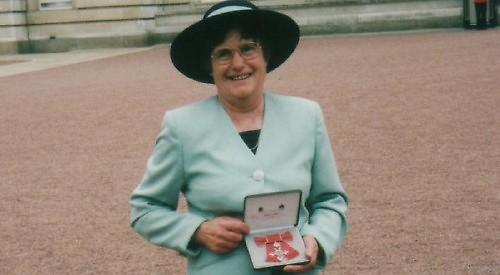 JOY ALDRIDGE MBE passed away peacefully on Christmas Eve after a long illness. She was 84.

There can be few people who have contributed more to the village life of Woodcote than Joy.

Beginning as a prominent member of the Woodcote Amateur Dramatic Society in 1967, she then moved on to the parish council, the village hall committee, the recreation ground committee and more sub-committees than she, or anyone else, could remember.

One of these sub-committees created the much-loved annual Woodcote Transport Rally.

Joy was a founder member of the Woodcote Volunteers, helped to create the Woodcote Correspondent newsletter and was instrumental in the foundation of the garden of remembrance at St Leonard’s Church.

She was born on April 3, 1937 in Doncaster, while her father was serving in the RAF nearby.

When her father was killed in 1942, Joy and her mother and brother and sister had to leave married quarters and moved in with a friend near Abingdon.

It was from this time that Joy’s connection with the local area began.

Times were hard for the family and Joy’s mother relied on her as the eldest to look after her siblings from a very young age.

As a girl, Joy determined that she wanted to become a nurse and trained at Princess Margaret Hospital in Swindon. She then completed a postgraduate course in diseases of the chest and heart at Peppard Hospital and was eventually promoted to ward sister.

It was while she was here that Joy agreed to go on a blind date, which soon led to her marrying Peter Aldridge, a local man who ran the saddlery and leather goods business G Aldridge & Son in Friar Street, Reading, with his father and grandfather.

Within a few years Joy had produced two sets of twins, “four under four”, as Joy was often to exclaim. These were girls Chris and Sue, born in 1966, and Jonny and Sarah four years later.

Jonny later joined his father and grandfather in the family business and it is now based at Church Farm, off Reading Road, Wodocote, after the shop closed in 2016.

Joy used her time with all her committees to raise money for worthy causes.

When she was president of the Laurels club in Woodcote, she heard that one lady, who was approaching her 100th birthday, had always wanted to fly on Concorde, so she used all her fundraising skills to make it happen. A keen and prolific gardener, she grew thousands of flowers every year, which were sold for charity at her popular annual plant sales.

All Joy’s hard work and commitment to the community was rewarded when she was made an MBE by the Queen in 1997.

Some years ago, Joy was involved in a project to research all the men on the village war memorial.

While at the time of their deaths they would all have been familiar and mourned as much-loved members of the community, a century on they were all but forgotten.

The project team produced a record, which is available in the local library, that described their lives and deaths and adds “flesh” and character to what had previously just been names carved in stone. Understandably, this was something of which Joy was very proud.

With the arrival over several years of seven grandchildren, Joy threw herself into the role of grandmother, or Nanny as she was known, with her customary enthusiasm.

She enjoyed nothing more than taking them all on trips, including up to London to the theatre.

But most enjoyable of all was seeing all the children having fun in the family garden and swimming pool.

Hard-working daughter and committed nurse, wife, mother and doting grandmother, village “supremo” and fundraiser extraordinaire, Joy was all these things and more.

She will be greatly missed by all those who knew and loved her.