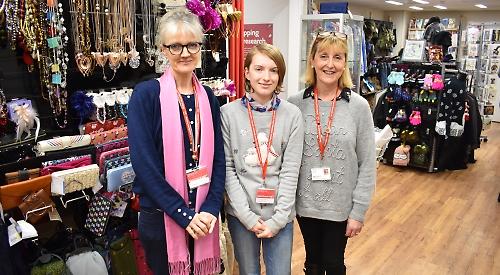 Oxfam, which has a shop in Market Place and a book shop in Duke Street, raised the highest total of £250,000.

This was more than twice as much as any of the other stores, which are all in Duke Street and represent Sue Ryder, Cancer Research, Helen & Douglas House, the British Heart Foundation and Thames Hospice.

The figures were supplied by the charities for a special report by the Henley Standard about the value of their shops to the town.

Shiri McAndrew, manager of the Thames Hospice shop, said: “Henley is such a friendly and generous town. People are happy to give their time and to support a good cause.” Godfrey Morgenstern, an Oxfam volunteer, said: “This is a relatively affluent area and there are a lot of people who want to donate.”

Fran Barter, manager of the British Heart Foundation shop, said: “This is quite an affluent area and all the charity shops are really well supported. I think having so many charity shops works because of the type of community we have.”

Susanna Beynon, manager of Helen & Douglas House shop, said: “Henley is such a lovely place. Everybody helps each other and it is so friendly.

“Some of our volunteers have been here ever since the shop opened 11 years ago and they never let me down.”

Town and community manager Helen Barnett said: “I think charity shops are a good thing for Henley and I don’t think we have got too many. They generate sales and bring footfall to the town.

“The shops have a reputation in South Oxfordshire for being well worth a visit and there is a spin-off for revenue generation through people buying lunch or coffee, or popping into other shops while they are here.

“You can also get some amazing bargains at the charity shops. They are all well known for having designer items and lovely products that have been donated.

“The other day, my daughter’s friend bought a Prada jacket at a very competitive price.”

Ms Barnett has always bought her Christmas cards from the British Heart Foundation because her father, Peter, suffered a heart attack.

“I am also a big fan of the Oxfam bookshop,” she said. “I love the idea of picking up a handful of books, reading them quickly and returning them so that they can be loved by someone else.

“The charity shops are providing a revenue stream for some amazing charities and offer a wonderful service to residents and visitors as they try very hard.

“The staff and volunteers are charming and you always get good customer service.” Niki Schäfer, who chairs the Henley Business Partnership, said: “There are opposing views about the charity shops in Henley.

“On the one hand, they do a very good job and are well presented.

“They make a real effort and are doing a fantastic job when it comes to recycling. In a world where we are trying to reduce waste, that element of charity shops is superb.

“However, there are lots of them. Someone from, say, Beaconsfield wouldn’t wake up and say, ‘let’s go to Henley for the charity shops’.

“How they are assessed in terms of viability to be in a particular plot is not the same as other shops, which makes it hard for fledgling businesses. It is also difficult for the high-end retailers to attract that kind of audience when there are lots of charity shops. When someone visits Henley that is the impression they are getting.”