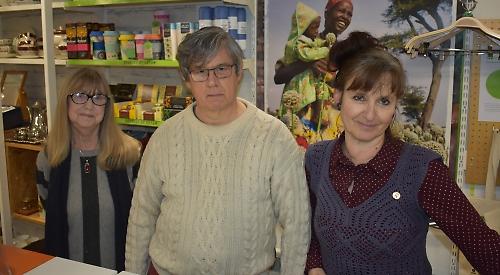 A CHARITY shop in Henley has appointed a new manager.

Sabine Adams, who has been manager of the Oxfam book shop in Duke Street for 10 years, has now also taken charge of the charity’s shop in Market Place.

Mrs Adams, who lives in Christmas Common with her husband Nigel, says she would like more volunteers.

She said: “In my book shop, I have more than 50 volunteers, which is quite a lot, but here I only have about 20 and we need more.

“We are a friendly and welcoming team and, of course, we are very motivated to raise money for Oxfam’s projects.”

The charity, which fights global poverty, has been in Henley since the Seventies and opened a second shop in 1998 to increase the offering to customers. The Market Place shop sells an assortment of goods, including clothes, homeware and toys.

Mrs Adams, who first volunteered with Oxfam in 2007, will spend three days a week in the Market Place shop and two other days at the book shop.

One of her first decisions as the new manager was to start a small book section in the Market Place shop, which she says has been well received.

She also spent time with a visual merchandiser from Oxfam to rearrange parts of the shop.

Mrs Adams said: “We have opened up the window display and made a bigger deal of our Sourced by Oxfam goods. We have also restyled the men’s and women’s clothing areas.”

She is also offering a voluntary internship at the Market Place shop for two days a week.

Mrs Adams said: “It will be a good opportunity for someone young to get some experience in project management, customer service and teamwork.

“It would give them a chance to build up their CV or go into paid employment in the retail sector.

“I have had two interns in the book shop before and they have both gone on to paid roles with Oxfam. One is a manager in Reading and the other is my assistant manager at the book shop.

“For the right person it is a really good opportunity. It would really suit a young person who has just left university.”

If you are interested in volunteering, email Mrs Adams at scladams@aol.com